In Gujarat circle, apart from government owned BSNL, there are three private operators with 3G licenses, namely, Tata Docomo, Idea Cellular and Vodafone. All three of them cover the major cities of the state, but Idea Cellular has the widest 3G network there, covering more than 160 towns and cities, while Vodafone covers close to 40 locations and Tata Docomo covers only 14 cities (as per the data provided by the operators on their websites). 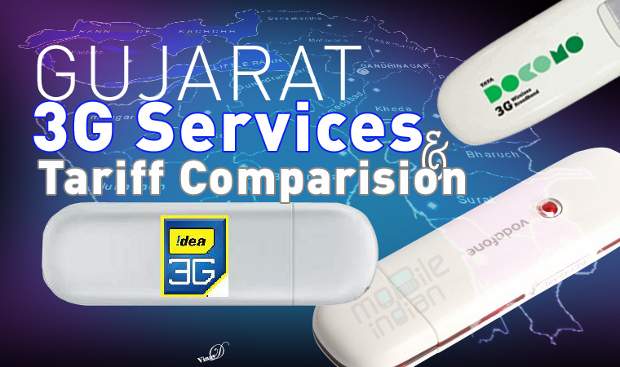 While in terms of coverage Idea Cellular is a clear winner, let’s find out who wins in terms of data plans for prepaid subscribers.

Tata Docomo offers the costliest unbundled data charges (charges without a pack or excess usage) at 10 paise per 10 KB. However, in terms of packs the operator is very competitive and offers single day packs for only Rs 5, with 50 MB data bundled. Rs 19 will buy you 300 MB for 3 days and for 7 days you will need to pay Rs 39 for the same amount of data. The operator also has a 21 day pack priced at Rs 255 offering 1 GB data, which makes it very expensive. Monthly packs start at Rs 90 for 600 MB and go up to Rs 450 for 2 GB. There is also a Rs 351 for 1.5 GB pack.

Not just in terms of coverage, Idea Cellular is a clear winner even in terms of tariffs. It is the only player to offer unlimited tariffs and its other packs are also very comparable in terms of price, and offer maximum choice as well. However, in case you are a heavy user you might feel a little constrained by the options. Vodafone is the second best and for heavy users it does have bigger plans, but the lack of unlimited plans makes it less attractive to most users. Tata Docomo seems to have lost steam. It was the first to launch a 3G network in Gujarat, but it has not added to its network very aggressively, and even in terms of pricing it is the least attractive with very few options, and that too more expensive ones.