OnePlus Nord wired earphones to launch in India on August 27 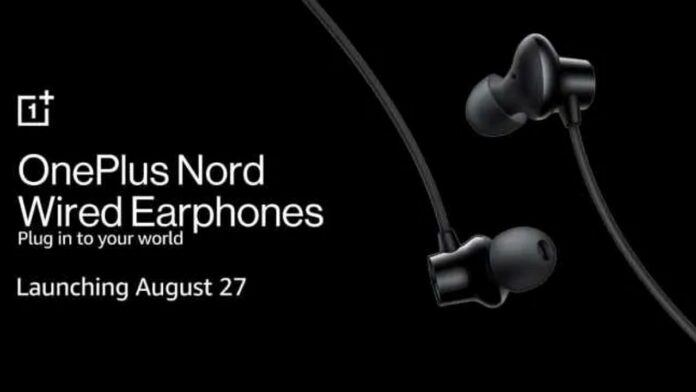 OnePlus will launch a new set of wired headphones in India this week. Called OnePlus Nord wired, the earbuds will be launched in the country on August 27.

Ahead of the launch, a microsite is now live on Amazon India. The listing on Amazon has revealed the design and some of the features of the upcoming earphones. The OnePlus Nord Wired Earphones will have a 0.42cc sound cavity and 9.2mm dynamic drivers. They will have an IPX4 rating, which means they can withstand sweat and unintentional splashes.

Further, the upcoming earphones will sport an in-line microphone and buttons to click on the power, volume up, or volume down buttons and music playback pause or resume. Besides, they can also take calls and use voice assistants using buttons.

The earphones will also feature magnets on both sides. They can be magnetized to each other so that they don’t dangle around while you’re walking. The Nord Wired Earphones will work with OnePlus phones that have a 3.5mm audio port. They work with any gadget that has a 3.5mm audio connector, though.

For the price, they are expected to be priced around Rs 1,500. OnePlus launched the Nord wired earphones with a 3.5mm connector in some markets. It is currently selling in the UK with a starting price of EUR 19.99 (around Rs 1,500). Lastly, they could be made available in a single Black colour variant.

The earbuds are IPX4 certified which makes them sweat and splash-resistant. They come with basic touch controls for playback and call management. They are claimed to offer a total of 20 hours of playback time on a single charge and up to 4.5h standalone playback.