The OnePlus Nord 2 India Price has been leaked alongside the specifications and colour options of the phone. 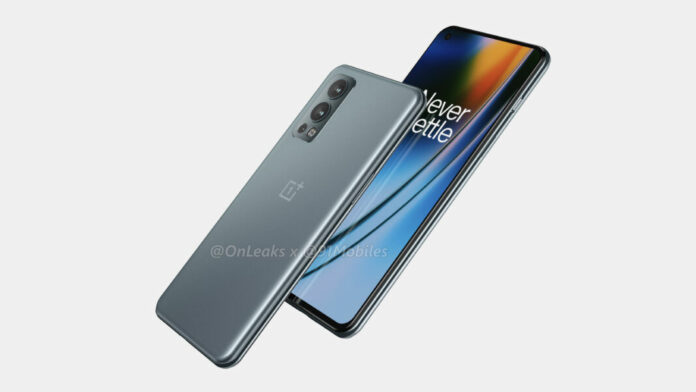 The leak comes from 91Mobiles in collaboration with tipster Yogesh. The leak suggests a pricing of Rs 31,999 for the 8GB + 128GB model and Rs 34,999 for the 12GB + 256GB model. The model should come in two colours, Grey Sierra and Blue Haze. This will be the first OnePlus Nord device that will be crossing the Rs 30,000 pricing mark.

The phone will sport a 6.43-inch FHD+ 90Hz AMOLED touchscreen as the company has confirmed the same as well. It will likely debut in two storage configurations – 8GB + 128GB and 12GB + 256GB. It will get UFS 3.1 fast storage with AI photography, AI display, and AI gaming modes. It will be the first phone to run on the new OxygenOS 11 whose codebase has been merged with ColorOS. The company has recently also confirmed it will get 2 years of major software upgrades with 3 years of security patches.

OnePlus Nord 2 5G will have an in-display fingerprint sensor. In addition, it will be backed up by a 4,500 mAh battery with 65W fast charging. It is confirmed to be powered by the MediaTek Dimensity 1200 – AI chipset.

The OnePlus Nord 2 will reportedly sport a triple rear camera system. There will be a 50 MP Sony IMX766 primary camera, an 8 MP ultrawide sensor and a 2 MP mono sensor. At the front, the phone should get a 32MP Sony IMX616 camera for selfies.

Additional features include dual speakers, dual 5G, Haptics 2.0, and Corning Gorilla Glass 5 on the front and back for protection. A recent leak by the same publication also shows the front of the device through 5K renders. The phone comes with a corner punch-hole camera and slim bezels on all sides per the render. This also confirms the phone will have a single camera on front in comparison to dual cameras on the previous Nord.

OnePlus will also be launching the OnePlus Buds Pro alongside the Nord 2 on July 22nd. As of now, OnePlus has not revealed much information about the upcoming Buds Pro. However, they will be the successor of the OnePlus Buds launched in India at Rs 4,990 last year.

OnePlus Buds Pro are expected to come with active noise cancellation (ANC). They could be priced more than OnePlus Buds. The company is yet to disclose the ket features of the upcoming buds.