A OnePlus Nord 2 blast case has popped up yet again which shows the back panel of the device popped open and completely burnt. 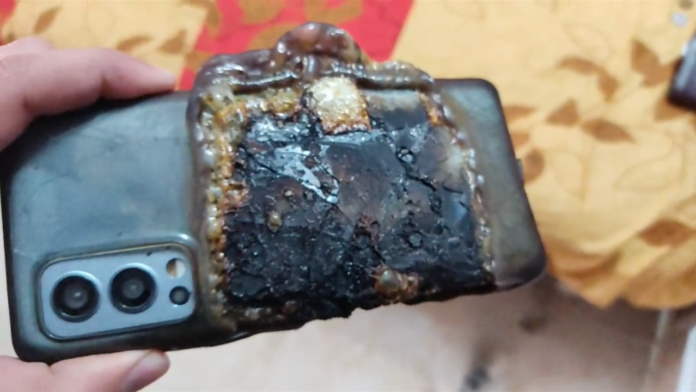 OnePlus Nord 2 has had quite a reputation as there have been three reports where the phone has blasted and now another one has popped up where the device has yet again exploded. However, not many details have been provided by the user regarding the blast but a video of the smartphone has been posted which shows the OnePlus Nord 2 completely destroyed.

The video posted by user @AbeerRazaKhan1 on Twitter shows the OnePlus Nord 2 back panel popped open and completely burnt. The user picks it up from the floor and shows to the camera where even the screen of the smartphone is shattered. Upon being asked about the details of the blast, the user said that the OnePlus Nord 2 blasted on its own on December 17 2021 in the user’s room.

The user also says that the company hasn’t responded for six days, and fortunately, no one was injured. He also disclosed that his Nord 2 was on charging when the alleged mishap happened. Unfortunately, onePlus also hasn’t responded and it is currently unclear what the situation is.

We have also maintained a record of the OnePlus Nord 2 blasts till now and the first blast took place on August 1 by a Bengaluru-based user named Ankur Sharma. The person on Twitter alleged that wife’s OnePlus Nord 2 blasted inside her sling bag while she was cycling. The woman had bought the Nord 2 just a few days ago.

The last incident was posted by Suhit Sharma on Twitter in November. He shared images of users’ burnt leg, along with the damaged phone. The blast took place in Dhule, India when the phone was in the right pocket of the user, where it suddenly blasted out of nowhere.