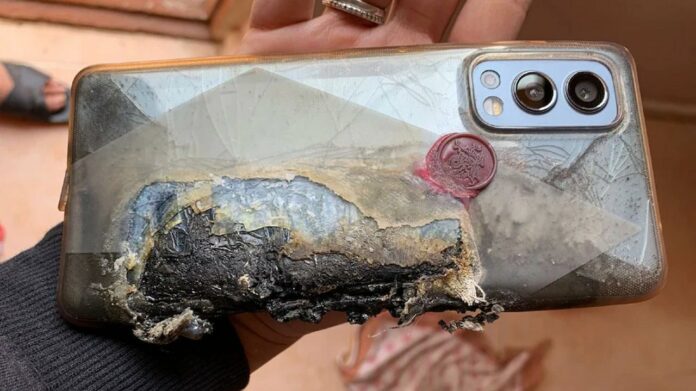 The first incident was reported on August 1 by a Bengaluru-based user named Ankur Sharma. The person on Twitter alleged that wife’s OnePlus Nord 2 blasted inside her sling bag while she was cycling. The woman bought the new Nord 2 just a few days ago.

The user also posted images of the damaged unit, which he later deleted. The pictures showed the rear panel totally destroyed. The frame, side panel, and display were burned as well. You can see the screenshot of the tweet (now deleted) below:

After an internal investigation, OnePlus said that the company found that the blast was caused by an isolated incident involving external factors and was not due to any manufacturing or product issue.

Check out the official statement from OnePlus below:

“Our top priority is the health and safety of our customers. We reached out to the concerned user immediately after hearing about this incident and initiated a thorough internal investigation. The results indicate that the damage to this device was caused by an isolated incident involving external factors and not due to any manufacturing or product issue. However, we remain in close touch with this user and have offered our support to address their concerns and ensure their wellbeing.

We would like to assure our customers that our products undergo thorough quality and safety tests, including various levels of pressure and impact tests, to ensure they are up to industry-leading standards and remain safe to use.”

In August only, a Twitter user tweeted about the OnePlus Nord 2 explosion incident, but the tweet was later deleted. The post also did not carry any pictures of the exploded unit.

As per the tweet, OnePlus Nord 2 unit which exploded was bought for his father, who is a government officer, to be safe and unharmed. The user claimed that his father is in trauma following Nord 2 explosion. OnePlus asked the user to DM with more details. However, the blast was found to be false by the company. OnePlus at that time officially confirmed that the second incident reported by Srivastava was fake.

OnePlus shared a statement regarding the second blase case;

“Earlier today, we were notified on Twitter about an alleged blast case for the OnePlus Nord 2. We always take such claims very seriously and immediately look into each one to first verify the legitimacy of the claim. During our conversation with this individual, we were able to confirm that this alleged case was false and in no way involved any OnePlus product. All OnePlus products undergo thorough quality and safety tests to ensure that they are up to leading industry standards and are safe to “use”, stated OnePlus.

“We also follow strict internal processes to ensure the health and safety of our users, while also protecting the reputation of our brand. We urge the public to exercise restraint in judging unverified allegations such as these,” the statement further added.

The third incident was reported by Suhit Sharma on Twitter this month itself. He shared images of users’ burnt leg, along with the damaged phone. The blast took place in Dhule, India when the phone was in the right pocket of the user, where it suddenly blasted out of nowhere.

Soon after the incident was reported, OnePlus responded with a statement saying, “We take such incidents seriously. Our team has reached out to the user and we are in process of collecting the details to investigate this further”. However, the exact reason behind the blast is still a question.

Replying to his tweet, many Twitter users have expressed their concern over repeated blasts of the OnePlus Nord 2 model.

Now OnePlus has issued a refund and is set to pay for victim’s medical expenses. The company’s operational head is also said to be in contact with the victim for any help or queries. Though, the user who reported the incident has also not shared any updates on the compensation. However, he clarified that OnePlus is in touch with him, and the R&D team is looking into the matter.