Just ahead of launch, full specifications and some key information have been leaked online via brochures giving us a fair idea of the upcoming smartphone.

OnePlus has already confirmed that it will be launching the latest OnePlus 5T on November 16. Now, just ahead of launch, full specifications and some key information have been leaked online via brochures giving us a fair idea of the upcoming smartphone.

All the specs have emerged in the form of what appears to be a brochure (via Concept Leaks) revealing everything about the OnePlus 5T. To start with the display, the latest smartphone will bear an edge-to-edge display with 80.5 percent screen-to-body ratio. There would be a new Sunlight Display “that adapts automatically to harsh light to facilitate a great viewing experience,” says the brochure. 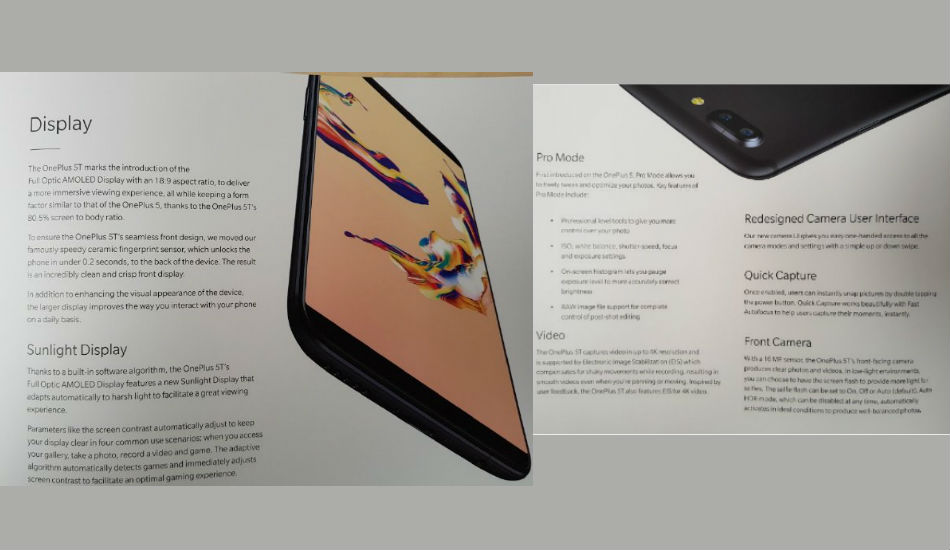 Further, the phone will be equipped with a new Pro Mode, which made its debut with the OnePlus 5. One will be able to control ISO, white balance, shutter speed, focus and exposure settings. The Pro Mode will also feature an on-screen histogram and it will come with RAW image support. The OnePlus 5T will feature a redesigned camera user interface and there would be a Quick Capture, through which users can instantly snap pictures by double tapping the power button.

Coming to the specifications, the OnePlus 5T will feature a 6.01-inch Full HD Optic AMOLED display with a screen resolution of 2160 x 1080 pixels and an aspect ratio of 18:9. The display will be protected by a 2.5D Corning Gorilla Glass 5. 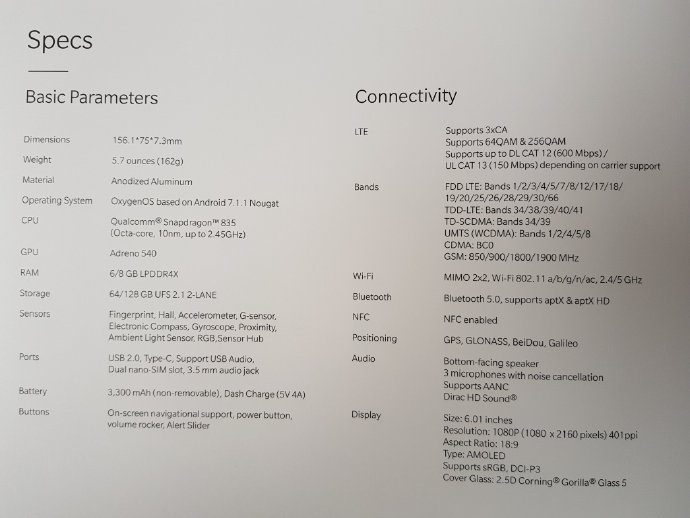 Under the hood, the smartphone will be powered by the latest Qualcomm Snapdragon 835 processor along with Adreno 540 GPU. The OnePlus 5T will come in two configurations: 6GB RAM + 64GB storage and 8GB RAM + 128GB storage options.

On the camera front, it will feature a dual-camera setup at the rear with a combination of 16-megapixel sensor with aperture f/1.7, Sony IMX 398 sensor, 1.12 micron pixel size, dual LED flash and focal length of 27.22mm, while the secondary camera will be of 20 megapixels along with aperture f/1.7, Sony IMX376K sensor, 1.0 micron pixel size and focal length of 27.22mm. The rear camera will support 4K video recording at 30fps, 1080p recording at 60fps and slow-motion video recording at 720p at 120fps.

For the front, you will get a 16-megapixel selfie camera with Sony IMX371 sensor, f/2.0 aperture, and 1.0-micron pixel size. OnePlus 5T will run on Android 7.1.1 Nougat based on Oxygen OS and it will bear a 3,300mAh battery along with Dash Charge for fast charging.