The smartphone will be powered by an octa-core Qualcomm Snapdragon 835 clocked at 2.3 GHz coupled with 8 GB RAM.

Earlier this month, OnePlus CEO Pete Lau has confirmed that OnePlus is working on something big and OnePlus 5 was confirmed to be in the works. Now as per a new report surfacing online, OnePlus 5 will be unveiled this summer.

OnePlus has confirmed The Verge that its next flagship smartphone will be launched in the summer of 2017. This phone will be a successor to OnePlus 3 and OnePlus 3T that were launched last year. OnePlus will skip the number 4 when it comes to their next flagship device mainly because it (No. 4) resembles the symbol of death in China. But there is also an interesting story behind the number 5. OnePlus has revealed that since the 5 is thejersey number of a former NBA player Robert Horry, who is considered a favourite among many employees of OnePlus, the company have chosen number 5.

Also, popular leakster, Evan Blass on twitter revealed some alleged specifications of OnePlus 5. As per his tweet, OnePlus 5 will feature a 5.5 inches 2K display with a pixel resolution of 2,560 x 1,440 pixels. It will be powered by an octa-core Qualcomm Snapdragon 835 clocked at 2.3 GHz coupled with 8 GB RAM, 64 GB internal storage and an expandable memory of 128GB via microSD card slot. 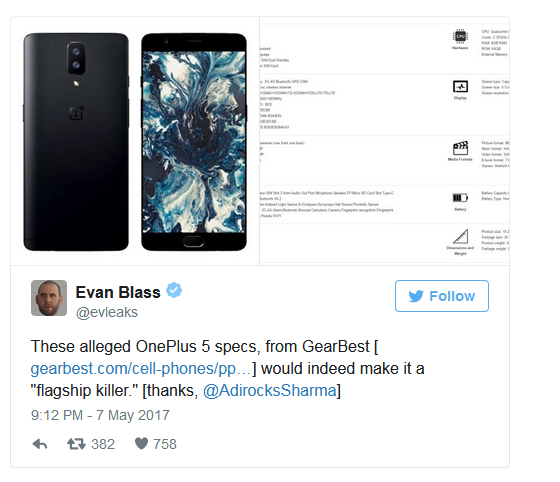 The smartphone will be powered by 4000 mAh non-removable battery and it will run on Android Nougat 7.1 out of the box with Oxygen OS. OnePlus 5 will be boasting a 23-megapixel camera on the back along with 16-megapixel camera on the front. However, there is no mention of dual rear camera setup which was rumoured in earlier leaks.

Just last week, the OnePlus 5 was found listed on Oppomart (reseller of Chinese smartphones). As per the listing, the smartphone is listed at $449 (Rs 28,870) but was ‘Out of stock’. As per Oppomart listing, the OnePlus 5 has a 5.5-inch quad HD (2560 x 1440 pixels) display. A Qualcomm Snapdragon 835 2.45 quad-core processor with Adreno 540 runs the phone with the help of 6GB RAM. It offers 64GB/128GB internal storage. This 4G smartphone runs on Android Nougat operating system, as per the listing. It is backed up by a 3580 mAh non-removable battery with Dash Charge 2.0 technology.

The listing also shows that the smartphone has dual rear camera setup of 12-megapixel. On the front, it has an 8-megapixel shooter for selfies. The dual sim based OnePlus 5 will come with a front-mounted fingerprint sensor.

The smartphone is expected to be released in May or June this year. Stay tuned to The Mobile Indian network for more updates on this.