OnePlus 5 is said to be powered by Qualcomm Snapdragon 835 chipset along with an 8GB of RAM.

OnePlus, as a brand has already earned a tonne of points last year with its OnePlus 3 and 3T and it is expected to built on it with its next flagship – tipped to be OnePlus 5. Just yesterday, four camera shots which are touted to be taken from the camera on the OnePlus 5 surfaced online. Now the company’s CEO Pete Lau has confirmed that OnePlus is working on something big. 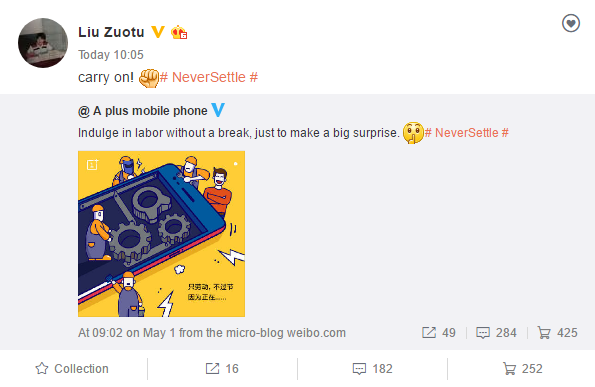 Pete Lau has revealed this information via Chinese microblogging website, Weibo post. The post talks about indulging in labour without rest, in order to bring out a surprise with hashtag NeverSettle. The CEO post is encouraging its people to continue and hints at the company working on a new smartphone which is most probably be OnePlus 5.

Recalling the previous rumours, it is expected to be powered by a Qualcomm Snapdragon 835 chipset along with an 8GB of RAM in the 128GB of variant while the one coming with 64GB of internal storage will pack 6GB of RAM. We can expect Android Nougat out-of-the-box and some reports claim that OnePlus might ditch the metal for ceramic to build their next flagship device. However, a previous report claimed that OnePlus will retain the same design language so you already know how can rumours turn out to be.

OnePlus have had a great run in India earlier with its OnePlus One and recently with the OnePlus 3T, so irrespective of the price the device is expected to do well in the Indian market. Also, we expect OnePlus to continue with its pricing strategy even though it will take more bucks to actually make OnePlus 5. Moreover, the dual camera setup at the back will now open more competition for OnePlus 5 in the name of iPhone 7 Plus, Mi 6 etc.