The Nokia X71 will be equipped with a triple camera setup that will include 48-megapixel primary sensor and 120-degree super wide-angle lens.

Nokia is all set to launch Nokia X71 on April 2 in Taiwan. Now ahead of the launch, the smartphone has been spotted on the Geekbench benchmarking website. The Nokia X71 is expected to launch as Nokia 6.2 or Nokia 6 (2019) in global markets which will be the successor of Nokia 6.1 or Nokia 6 (2018)

As per the listing, the upcoming smartphone will be powered by a Qualcomm Snapdragon 660 chipset under the hood. In addition to this, Nokia X71 will also include up to 6GB of RAM. As for software, the Geekbench listing reveals that the handset will be running on the Android Pie operating system. The device has scored 1455 and 5075 in the single-core test and multi-core test respectively. 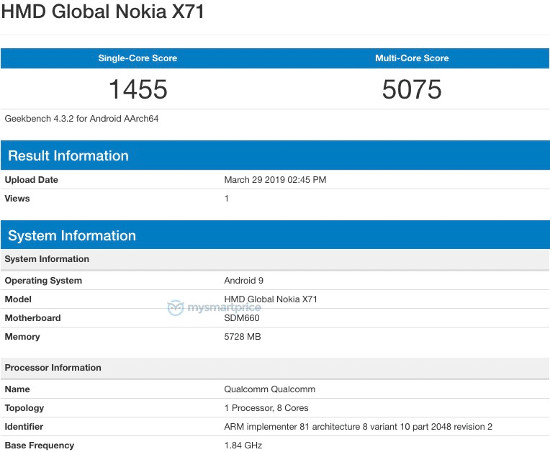 The smartphone will be equipped with a triple camera setup that will include 48-megapixel primary sensor and 120-degree super wide-angle lens. No details regarding the third sensor are available currently. As per earlier reports, the Nokia X71 will be the company’s first smartphone to feature a punch-hole display.

Recently, the Nokia TA-1167 smartphone was approved by the National Communications Commission (NCC) in Taiwan. It is said that the Nokia TA-1167 could be the upcoming Nokia X71 smartphone. The NCC certification of the phone had revealed that it will be coming with the Salcomp AD-18WU charger that was made available with the Nokia 7 Plus.

The Nokia 6 (2019) is expected to feature 6.2-inch full-HD+ display and 19:9 aspect ratio. The phone will be reportedly powered by Qualcomm chipset coupled with 4GB/ 6GB RAM and at least 64GB storage. The phone will likely run on Android 9 Pie out of the box and backed up by a 3,050mAh battery with fast charging tech.