Nokia X71 with 48-megapixel camera to launch on April 2

The smartphone will be equipped with a triple camera setup that will include 48-megapixel primary sensor and 120-degree super wide-angle lens.

Nokia will be announcing a new smartphone called the Nokia X71 on April 2 in Taiwan. The company has sent out invites for the event of the handset which will launch alongside the Nokia 9 PureView next month.

At the MWC event which was held in February this year, HMD Global did not unveil any premium mid-range device. Instead, it launched devices such as the Nokia 3.2, Nokia 4.2 and Nokia 1 Plus. Hence it is expected that the Nokia X71 is a successor of the Nokia 6.1 Plus or Nokia 8.1. 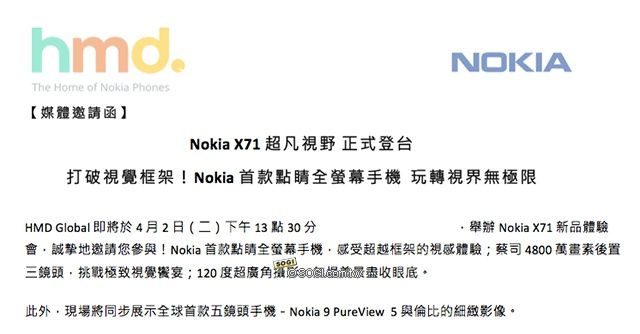 The launch event invite confirms that the smartphone will be equipped with a triple camera setup that will include 48-megapixel primary sensor and 120-degree super wide-angle lens. No details regarding the third sensor are available currently. The other major specs of the phone are not known at the moment. As per earlier reports, the Nokia X71 will be the company’s first smartphone to feature a punch-hole display.

Recently, the Nokia TA-1167 smartphone was approved by the National Communications Commission (NCC) in Taiwan. It is said that the Nokia TA-1167 could be the upcoming Nokia X71 smartphone. The NCC certification of the phone had revealed that it will be coming with the Salcomp AD-18WU charger that was made available with the Nokia 7 Plus.