Nokia G21 is expected to launch in India this month itself. Now we have our first look at the device via some official renders. 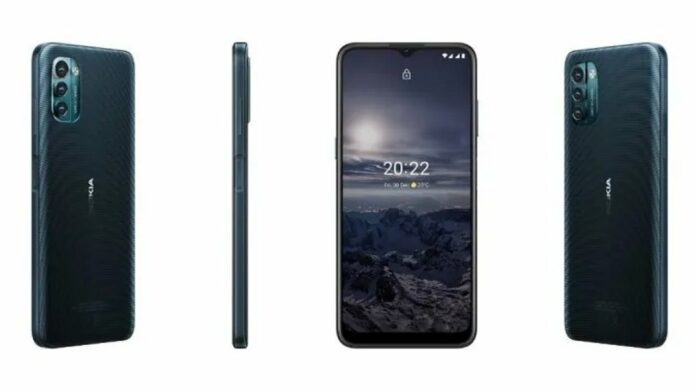 Roland Quandt has leaked the renders of the upcoming Nokia G21. As per them, the phone will come in dark green, dark brown, and light green colour options. Further, it is also revealed that Nokia G-series handset will offer a triple-rear camera setup.

In addition, the leaked renders reveal that the handset will come with a waterdrop notch display and a thick bottom chin up front.

The triple rectangular camera setup is placed on the top left corner of the panel. The right side of the handset will house the volume rockers and the power button. The power button will also double as the fingerprint scanner. The sim-card tray and a button are placed on the left side.

he Nokia G21 was spotted on the Geekbench database earlier this week. As per the listing, the phone is powered by a Unisoc processor that offers a base frequency of 1.61GHz. This could be the Unisoc T606 chipset. In addition, the phone will come with 4GB of RAM, and it runs on Android 11. It has scored 312 and 1157 points in the single-core and multi-core tests of Geekbench, respectively.

The phone will reportedly feature a 6.5-inch LCD with HD+ resolution. For the triple rear camera, there will be a 50MP main sensor. Besides, the phone will ship with a 5,000 mAh battery, headphone jack and microSD card slot.

To recall, Nokia G20 was launched in India last year. The device comes with a price tag of Rs. 12,999 for the sole 4GB + 64GB storage variant. The handset comes in Glacier and Night colour options.

Share
Facebook
Twitter
WhatsApp
ReddIt
Previous articleAsus Chromebook Flip C214 now available with a Rs 1,999 EMI per month; But should you buy it?
Next articleOppo Reno 7 Review: Its strength is its weakness?
RELATED STORIES