Nokia 9 spotted on Geekbench with Snapdragon 845 and 6GB RAM

The Nokia 9 PureView with its penta-lens setup is one of HMD Global’s most anticipated Nokia-branded devices.

HMD Global is likely to launch the Nokia 9 PureView flagship phone on February 24 at the Mobile World Congress event in Barcelona. Now ahead of the launch, the phone has been spotted on GeekBench benchmarking website. The listing has revealed the specifications of the phone which are in line with the previous leaks.

As per the GeekBench listing, the Nokia 9 PureView is powered by the Snapdragon 845 chipset and 6GB of RAM. For the software, the phone comes preinstalled with Android 9 Pie OS.

The Nokia 9 PureView has appeared as “Nokia 9” on Geekbench listing. The phone has scored 2269 points in the single-core test and 8793 points in the multi-core test. 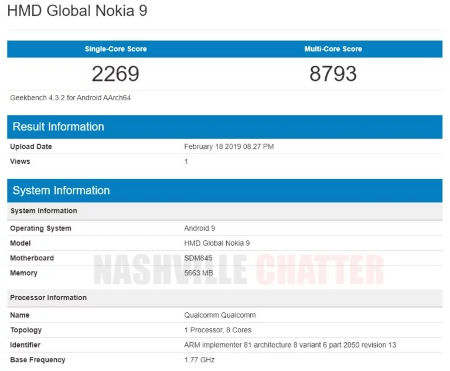 The Nokia 9 PureView with its penta-lens setup is one of HMD Global’s most anticipated Nokia-branded devices. The phone will have the five rear cameras housed in a circular arrangement and that the sensors will be provided by Zeiss optics. Alongside the Nokia 9 PureView flagship smartphone, the company is also likely to announce the Nokia 8.1 Plus, Nokia 6.2, a feature phone and some other smartphones at MWC event this year.

The phone will have the five rear cameras housed in a circular arrangement and that the sensors will be provided by Zeiss optics. On the software front, Nokia 9 PureView will run the latest Android 9.0 Pie operating system out of the box. Nokia 9 PureView will include a fingerprint sensor and NFC support. The phone will support Qi wireless charging and will feature an in-display fingerprint sensor.