The Nokia 9 PureView with its penta-lens setup is one of HMD Global’s most anticipated Nokia-branded devices.

HMD Global has scheduled its Mobile World Congress (MWC) event on February 24 in Barcelona in which the company is expected to launch the flagship Nokia 9 PureView smartphone. Now ahead of the launch, the smartphone has appeared on Android Enterprise website showing the key specs of the smartphone. 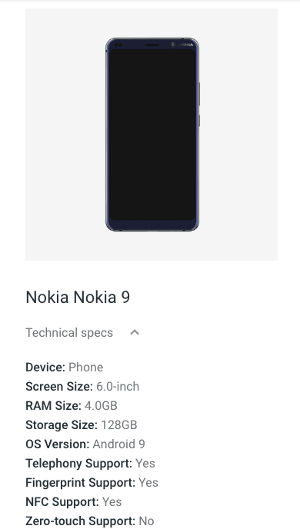 The Nokia 9 PureView with its penta-lens setup is one of HMD Global’s most anticipated Nokia-branded devices. The phone will have the five rear cameras housed in a circular arrangement and that the sensors will be provided by Zeiss optics. Alongside the Nokia 9 PureView flagship smartphone, the company is also likely to announce the Nokia 8.1 Plus, Nokia 6.2, a feature phone and some other smartphones at MWC event this year.