We have already seen Nokia 9 and Nokia 6 (2018) smartphones surfacing in various leaks and rumours for quite some time now. This time both the smartphones have reportedly got the necessary 3C certification in China, which indicates the launch of the smartphones is around the corner.

The Nokia 9 and Nokia 6 (2018) that have been revealed through its 3C approval boast model numbers TA-1042 and TA-1054 respectively. There is no information available on the specifications of these phones in the 3C listing. Apart from the TA-1042 model, Nokia 9 is also likely to launch in two more variants known as the TA-1005 and TA-1009.

HMD Global is likely to unveil the Nokia 9 along with a Nokia 8 (2018) on 19th January 2018. Since the Nokia 6 was announced in China in January and at MWC globally, it is likely that its successor might also debut at MWC 2018. Just yesterday, Nokia 6 (2018) with model number TA-1054 was certified by TENAA certification website in China. 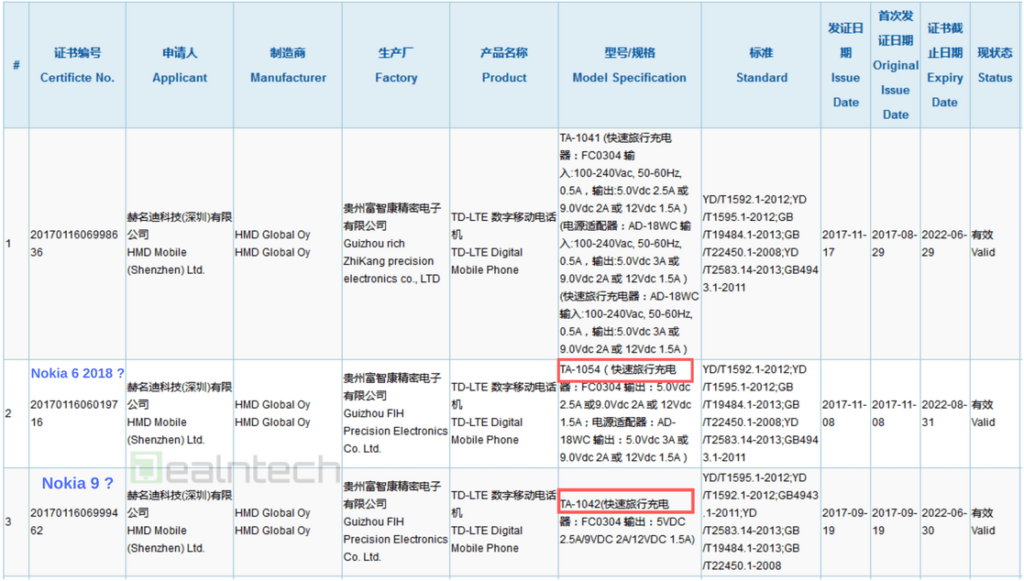 As per earlier reports, Nokia 6 (2018) is said to come with 4 GB of RAM and 32 GB of internal storage. But depending upon the market, the device is also expected to come in other variants which are likely to be 3GB RAM with 32GB storage and 4GB RAM with 64GB storage. It might feature a 5.5-inch display with 18:9 aspect ratio, dual rear camera setup and powered by Snapdragon 630 chipset. It will be featuring a fingerprint sensor on the back of the device.

Based on the leaks so far, the Nokia 9 device is expected to feature a 5.5-inch QHD bezel-less display with a resolution of 1440×2560 pixels. Other than this, the device is expected to powered by Snapdragon 835 processor and will run on Android 8.0 Oreo operating system. Additionally, the device will come with 6/8GB RAM along with 64/128GB of storage space. The smartphone will be backed up by a 3800mAH battery with Qualcomm Quick-Charge 4 support.