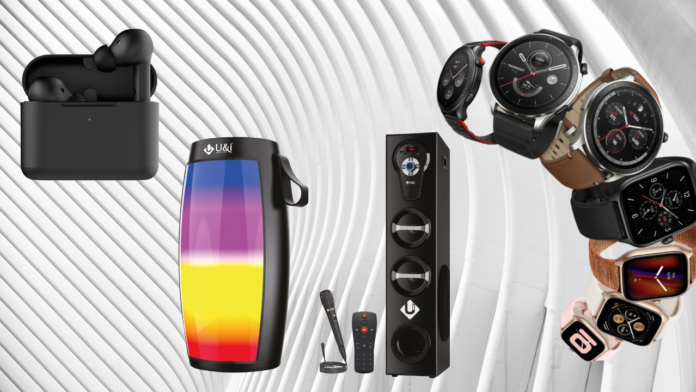 A few products in the hearable and wearable categories have been launched in India today. The products include two speakers from U&i, a smartwatch from Amazefit and TWs from Noise.

On the other hand, Tower Box Series has a 100 Watt Wireless Speaker and comes with a mic. It is 30-inches in height and weighs a 10Kg. The speaker is equipped with a 3-way audio system featuring a 4-inch tweeter, a 4-inch mid-range speaker and an 8-inch woofer. One can pair it wirelessly with a phone or tablet over Bluetooth. It also supports USB and micro SD card connectivity options as well.

Noise has launched IntelliBuds, which is powered by Bragi. It is priced at Rs 4,999 and comes in a black and white colour variant. The New TWS from Noise supports features such as Gesture Control, Hot Voice Command Music Sharing directly from earbuds, Transparency Mode and Customized Equalizer.

With Hot Voice Command. All you need to do is say – ‘Hey Headphones’ followed by the command – Accept / Reject for incoming calls, Play/ Pause/ Next/ Previous for music, Transparency On/ Off to activate the mode, and Assistant to access the respective features.

In Music Sharing, users can pair secondary IntelliBuds to the primary one without connecting with the main device. The company claims the Noise IntelliBuds gives 9 hours of battery on a single charge with 36 hours of playtime. It is powered by a MediaTek chipset.

Amazfit has Launched GT 4 Series Smart Watches – Amazfit GTR 4 and GTS 4 smartwatches with NavIC enabled in them. NavIC is ISRO-designed India’s satellite system, an alternative to GPS and GLONASS.

Amazfit GTS 4 Smart Watch has a 1.75-inch AMOLED display, and the company claims it has an 8 days battery life. In addition, it comes with Alexa built-in.

Amazfit GTR 4 Smart Watch, on the other hand, has the same battery and display but additionally supports Bluetooth Phone Calls.