Realme RMX2027 is speculated to be the upcoming Realme 6 smartphone.

A new Realme smartphone with model number Realme RMX2027 has been spotted on the Geekbench benchmarking website. The phone is speculated to be the upcoming Realme 6 smartphone.

The listing reveals that the upcoming smartphone will run on Android 10 operating system out of the box. As of now, it is not known if this Realme device will feature the company’s Realme UI or will it use the Color OS user interface. It will be backed by 4GB of RAM. 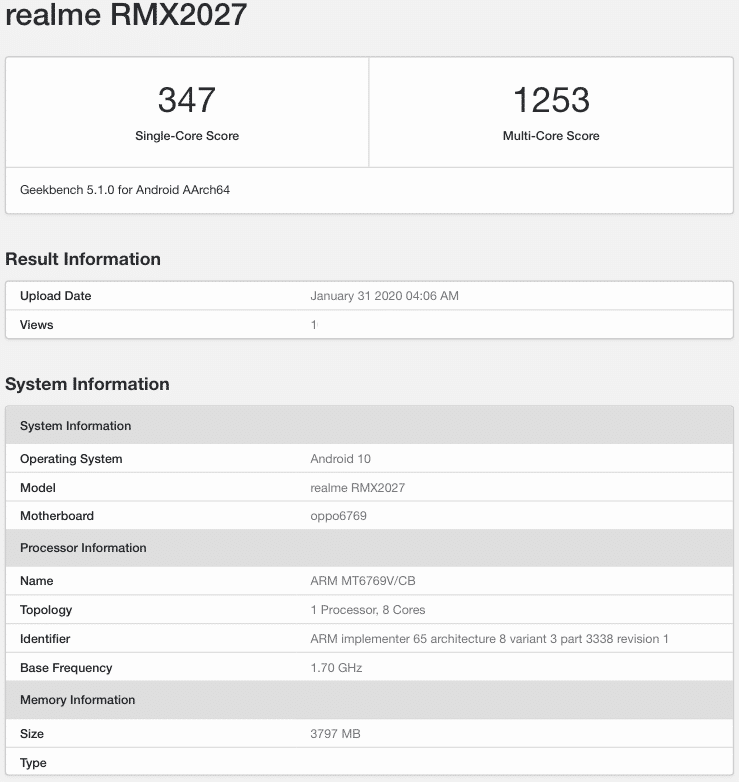 The listing further suggests that the alleged Realme 6 is powered by an octa-core MediaTek Helio P90 processor. The smartphone has got 347 points in the single-core test and 1253 points in the multi-core test.

As of now, no more details about the Realme 6 are known. We expect the phone to surface in more leaks in the coming days. Stay tuned to The Mobile Indian for more updates on this.

Meanwhile, Realme C3 is all set to launch in India on February 6. Realme C3 will be backed up by a 5000mAh battery. It will come with a6.52-inch HD+ Mini-drop notch display with 89.8% screen-to-body ratio. phone will have two variants – 3GB + 32GB and 4GB + 64GB storage. It will have a 12-megapixel rear camera with f/1.8 aperture. The phone will be powered by the latest MediaTek Helio G70 12nm processor.