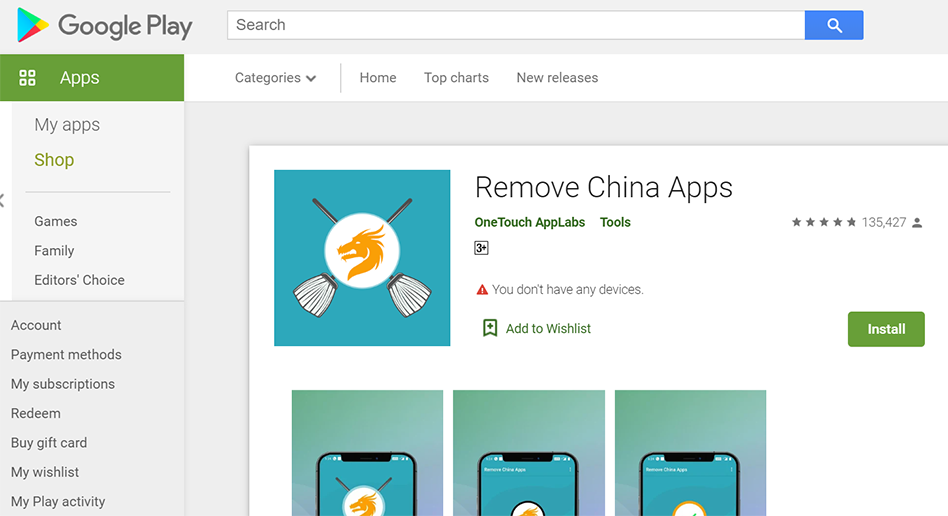 The anti-China sentiment seems to have given birth to another product that has caught everyone's eye.

There have been multiple news reports about unrest between India and China over the past few days. Social media has been buzzing with updates about the situation, which many feel is becoming serious. This has catapulted many Indian people to chant about boycotting Chinese items, including software. And just like that, their prayers were heard with an app called Remove China Apps which has unsurprisingly clocked more than 1 million downloads within 10 days of its launch. It has also got a 4.8 rating on the Play Store.

As you can figure out by the name, downloading this app on the phone allows users to detect any Chinese apps installed on the device, and helping them remove those apps with ease. “Remove China Appwill help people to support “Atm Nirbhar Bharat’ by identifying the origin country of the applications installed in their mobile phones,” it says.

The Google Play listing of the app suggests it was released on 17 May, and its last update was issued on 29 May. It’s running on version 1.1 and it asks for the following permissions to work on a device:

The developer of the app is OneTouch App Labs, based out of Jaipur in Rajasthan. As per the details shared on Google Play it says, “Detecting the country of origin is based on the market research but we do not guarantee for any correct/wrong information, so users should act only at their own will.” The developer also assures the app is not asking for extensive set ot permissions on device, “that makes this app very safe and secure to use.”

The app is pretty simple. You download from Play Store, open the app, and click on detect for apps. We installed TikTok and slew other Chinese apps on the phone and the app manage to detect them and gave us the option to delete as well. It also thanked everyone downloading the app. “Thank You everyone who is helping PM Modi’s initiative Self Reliant India.”

People in India clearly seem to have warmed up to the idea of deleting all Chinese apps from their phones, which ironically are also made in China. And It’s obvious that OneTouch Labs is milking the trend to its advantage, without helping people understand what do they achieve by deleting these apps.