A new feature in the Netflix Android app is now rolling out which allows users to watch partially downloaded content. 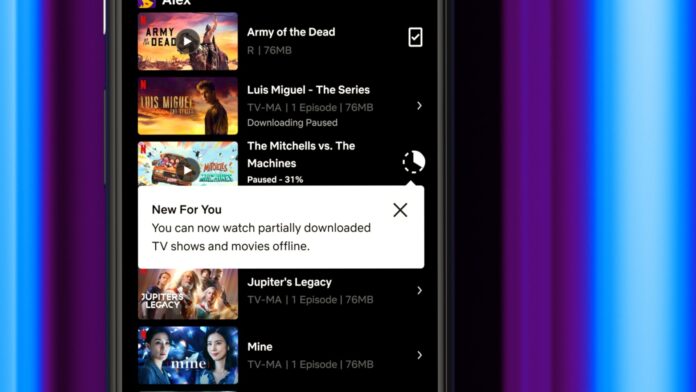 Netflix has announced that it is launching a new feature called Partial Download for its app on Android. As the name suggests, the feature will allow users to watch shows even if it hasn’t fully been downloaded. The download feature was first introduced in 2016 so users can watch shows while being offline.

Netflix announced the Partial Download feature through a blog post. With the help of this feature, Netflix is making another significant addition to its ‘Downloads’ feature. With the Partial Downloads feature, you will be able to start viewing the content even if the downloading hasn’t completed because of a weak internet connection or some other reason.

The Netflix Partial Download Feature is already rolling out to Android phone and tablet users. For iOS, Netflix will begin testing the feature in the upcoming months.

A new feature by the name of ‘Play Something’ was recently spotted on the Netflix app. The Play Something tab shows recommendations for shows and movies based on the user’s preferences. In addition, there’s a ‘Play Something’ button that appears in the bottom navigation bar.

The feature works on a profile-by-profile basis meaning each profile will have different recommendations based on the user’s preferences.

Netflix announced that the feature can be accessed in 3 different ways including on the profile selection screen under your name, in the navigation menu (wherever available) on the left side of the screen, and in the tenth row on the Netflix homepage.