Starting with the latest MateBook X Pro, the laptop can be considered as one of the thinnest laptop available in the market.

Huawei has today introduced the launch of the latest MateBook X Pro and MediaPad M5 tablets at the Mobile World Congress (MWC) 2018. The Huawei MateBook X Pro comes with a price tag of EURO 1,499 for the i5 model, while the Core i7 model with 8GB RAM is priced at EUR 1,699 and Core i7 model with 16GB RAM comes with a price tag of EUR 1899. The laptop will be available in the select market including China, US, Saudi Arabia, Germany, Spain, Italy and Nordic starting from Q2, 2018.

Starting with the latest MateBook X Pro, the laptop can be considered as one of the thinnest laptop available in the market. The device comes with a 13.9-inch FullView 3K display with a 91 percent screen-to-body ratio, which the company claims give clearer and brighter view. The display with touch-screen enabled as well.

The laptop is powered by the latest 8th generation Intel Core i7 8550U processor, along with NVIDIA GeForce GTX 1080 GPU. The laptop is backed by an 8GB/16GB of RAM and 256GB or 512GB of storage option. Interestingly, this is the laptop that comes with a recessed camera. The camera is hidden within the keyboard and it pops up when you hit the F6 command. The MateBook X Pro runs on Windows 10 and it comes with a fingerprint sensor embedded in the power button.

The laptop is backed by a 57.4Wh battery, which the company claims can deliver 12 hours of video playback and 15 hours of web browsing. On the connectivity front, it features two USB Type-C ports with one supporting Thunderbolt 3, a traditional USB-A port and a headphone jack. The laptop measures 304 x 217 x 14.6mm and weighs 1.34 kgs. The laptop comes loaded with quad speakers from Dolby Atmos. The MateBook X Pro features a full-size chiclet keyboard and an extra-large touchpad.

Moving on, the brand has introduced new MediaPad M5 tablets at the event as well. The company has also announced  M5 10 Pro variant as well.

To start with, the Huawei M5 tablets comes with 8.4 inches and 10.8 inches display, while the Pro model comes with a 10 inches screen with each of one it sporting a WQXGA IPS display with a screen resolution of 2560 x 1600 pixels. The brand claims that the tables are world’s first to feature a 2/5D curved glass design. The models are powered by the latest HiSilicon Kirin 960 processor along with Mali-G71MP8 GPU.

The MediaPad M5 10 Pro, comes with a bunch of interesting features. To start with, it comes bundled with Huawei’s M-Pen stylus, which supports up to 4,096 levels of pressure sensitivity and it has built-in POGO pins that allow it to pair with a keyboard, which put it in the competition to the iPad Pro. 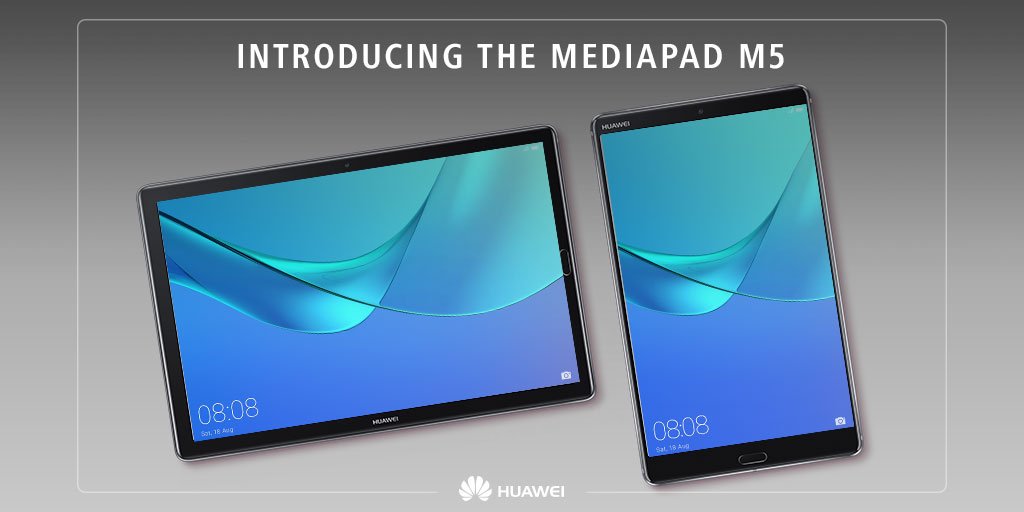 Coming to other specifications, all the models are backed by a 4GB of RAM. The 8.4-inch model and 10.8-inch model will be available in 32GB/64GB/128GB storage options, while the Pro variant comes with 64GB/128GB storage option, which can be further expanded up to 256GB via micro SD card slot. There’s also a “Desktop View” that adds a taskbar to the bottom of the screen, with easy access to shortcuts for file sharing and editing.

On the camera front, the tablets feature a 13-megapixel rear camera and an 8-megapixel front-facing camera for selfies and video calling. The MeidaPad M5 Pro and MediaPad M5 10 are backed by a 7,500mAh battery, while the MediaPad M5 8.4 is backed by a 5,400mAh battery. The tablets run on the latest Android 8.0 Oreo with EMUI 8.0 running on top of it. On the connectivity front, it supports LTE, Bluetooth 4.2, and Wi-Fi 802.11a/b/g/n/ac, Hi-Res audio and USB Type-C port.

Huawei Mate Xs expected to launch in March 2020, Will it come with Android?