Music of Don 2 available on Hungama.com

Mobile users can listen to the songs through Hangama's mobile app and WAP page. The movie features Shahrukh Khan.

The music of Don 2, which is a sequel of hindi movie Don staring Shahrukh Khan and Priyanka Chopra is now available on Hungama.com. User can download the soundtrack of Don 2 from Hungama.com on their mobile phone or PC. 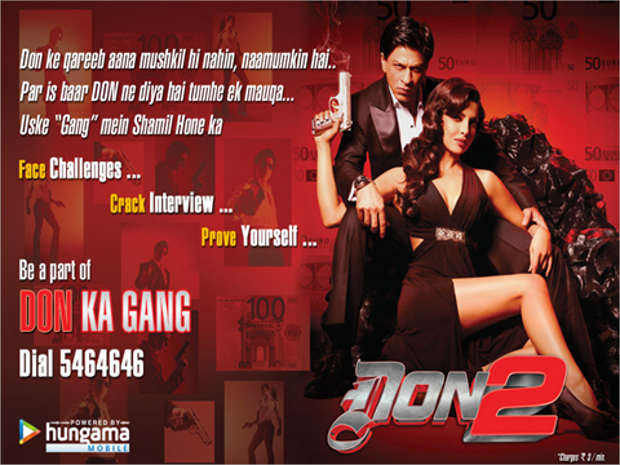 Hungama Mobile has also created a voice game based on the movie, which offers a chance to 10 players who could get lucky and meet the Don himself! The game ‘DON KA GANG’ is based on the movie Don 2. It has a set of challenges that the players have to go through in order to complete the levels and thus be included in the final 10, who stand a chance to meet the Don himself. The player has 5 levels to complete and each level gets even harder than the first, but closer to the reward- a chance to be recruited into the Don’s gang and meet Shahrukh Khan.

The soundtrack for Don 2 is also live on Hungama.com. The music of the film has been put together by Shankar-Ehsaan-Loy and Javed Akhtar. The album begins with a monologue by SRK signaling the comeback of the Don. This is followed by the title song ‘Zaraa Dil Ko Thaam Lo’ which takes off from ‘Aaj Ki Raat’ and brings back the sound of the early 80s in a fresh new presentation.

Shaan’s version of ‘Main Hoon Don’ from Don – The Chase Begins Again, is presented by KK in Don 2 as ‘Mujhko Pehchaanlo. The fun element however is provided by ‘The King Is Back – Theme’ – a four minute long piece that takes forward the anthem of ‘Don’ with Sunitha Sarathi providing a fitting tribute to the song.