MTS has finally launched its first tablet in the form of the MTag 7.0 in the Indian market. However, it is currently available in Rajasthan and Andhra Pradesh only. The tablet which is based on Android 2.2, a very old version of the Android operating system, comes with 800 MHz processor, 5 megapixel camera, and supports MTS high speed data network.

MTS MTag 7.0 is made by Lava mobile and offers features like GPS, SIM calling, and 32 GB expandable memory. The tablet is priced at Rs 8,999, and comes with attractive voice and data tariffs. 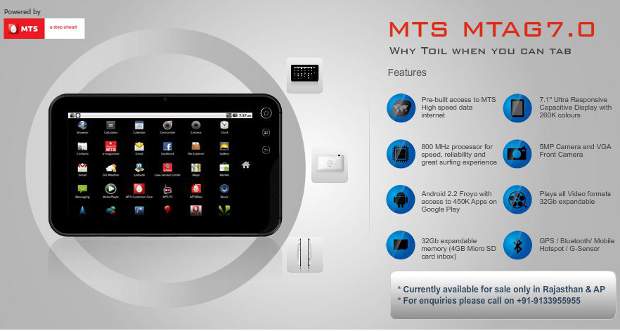 While talking to The Mobile Indian, an MTS spokesperson said, “The response to this pilot has been tremendous and we plan to launch it nationally but we cannot comment on the timing at this stage.â€

MTS is offering two special postpaid plans with this tablet priced at Rs 598 per month and Rs 798 per month. The first plan offers 2.5 GB of data, 6060 seconds of local and national calls, and 101 SMSes. On the other hand, the costlier plan offers 5.5 GB of data apart from the same voice and SMS benefits. Both the plans are also available with yearly pack priced at Rs 5,382 (Rs 448 per month) and Rs 8,999 (Rs 749/month). For the prepaid users MTS is offering Rs 598 pack with same benefits as postpaid users.

While the tablet is based on an older platform at a time when most tablets are coming on the latest Android 4.0 version, the features, benefits and the pricing that MTS is offering with the tablet is one of the best in India. These offers to some extent compensates for the old Android platform. In any case Android 2.2 is still supported by majority of applications on the Google Play store.

Only other operator selling a tablet is RCom which is offering its 3G Tab V9A to its GSM customers for Rs 14,999. The older version of the GSM tab, which is simply known as Reliance 3G Tab, is priced at Rs 12,999 while the CDMA tablet, called Reliance CDMA tablet, is based on Android 2.3 and is available for Rs 12,999. While in terms of data packs, the Reliance CDMA tablet offers similar benefits as MTS, there is no voice or SMS benefits are included in the offer.