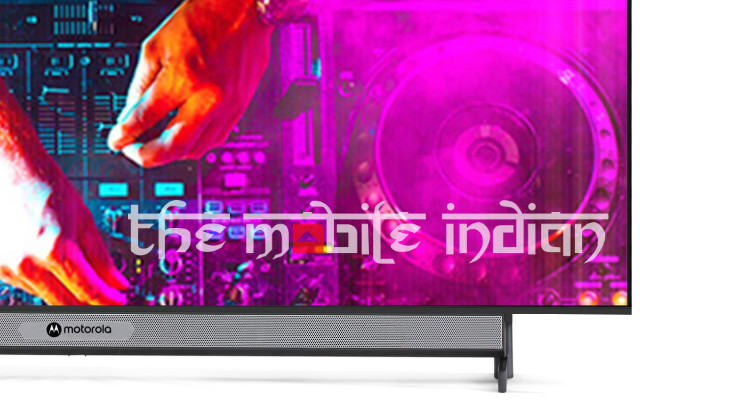 Sources close to the development told The Mobile Indian that the company is also launching a Smart TV in the country.

Motorola is all set to launch a new smartphone known as Moto E6s, in India on September 16. Now, sources close to the development told The Mobile Indian that the company is also launching a Smart TV in the country.

Update:Flipkart to be brand Licensee of Motorola Smart TV

We have also obtained an official image of the upcoming Smart TV. The image reveals that the Smart TV will come loaded with a slim side bezel and there will be a dedicated large soundbar, which is situated at the bottom.

Sources familiar with the development told The Mobile Indian that the upcoming Smart TV will come loaded with MEMC that basically removes the latency during the scene shift, thus, making it a smoother viewing experience.

The major highlight of the Smart TV is said to be the front-firing in-built soundbar. It is loaded with a 30W speaker and it is loaded with DTS TruSurround and Dolby Audio. The DTS TruSurround basically allows getting the feel of a 5.1 channel home theatre with a two-speaker system, while the Dolby Audio helps in enhancing the dialogue and volume levels for an immersive audio experience.

This is the first time, Motorola is entering into the TV segment. The company will face stiff competition with the likes of Samsung, Xiaomi, Kodak and more. Xiaomi has already confirmed that it will launch a new Smart TV with 65-inch 4K display on September 17. OnePlus is also gearing up to launch its first Smart TV in India pretty soon.