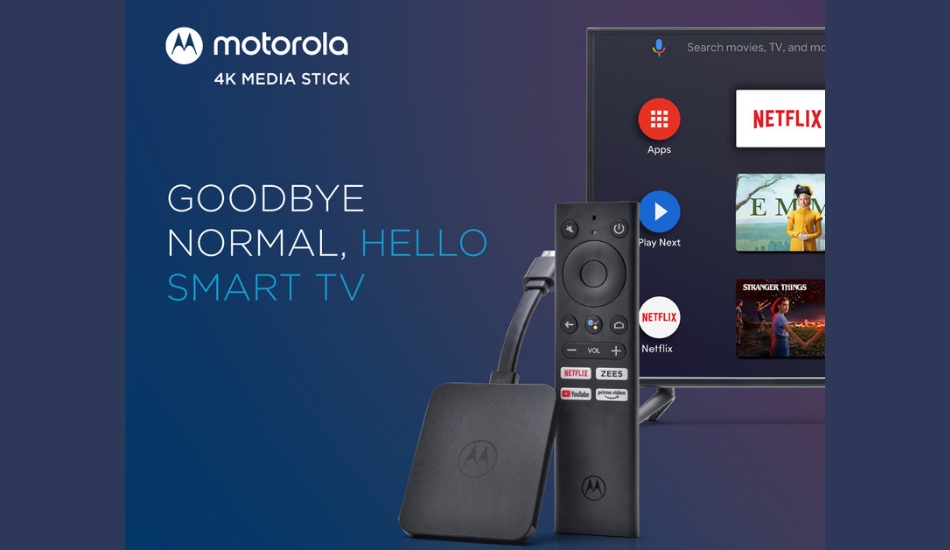 Flipkart has launched the Motorola 4K Android TV Stick on its site for Rs 3,999. The TV Stick runs on Android 9.0 OS.

Flipkart today announced the launch of Motorola 4K Android TV Stick in India. It is part of Flipkart’s strategic partnership with Motorola and marks an entry into a segment that is rapidly gaining traction among Indian consumers. The streamer will be available on Flipkart from March 15, 2021, for Rs 3,999.

The stick is compatible with all Android TVs and has a built-in Chromecast that allows users to project their mobile screens onto the TV. It is equipped with 2 GB RAM, and 16GB of inbuilt storage. With resolutions of 2160P, 1080P, 720P at 60 frames per second, the streamer provides an “Ultra HD and Full HD” viewing experience.

It also supports the HDR10 and HLG video formats and has hotkeys for popular streaming apps such as Netflix, Amazon Prime Video, Zee5, and YouTube.

Commenting on the launch, Chanakya Gupta, Vice President – Private Brands, Flipkart, said, “This offering, in partnership with Motorola, is the latest in our efforts to bring the best products with strong value propositions to consumers. There has been a notable rise in demand for in-home video entertainment solutions since the pandemic began, and TV streaming sticks have become even more widely popular as a result”.