The smartphones will come with 2350mAh battery and 16GB of internal storage. 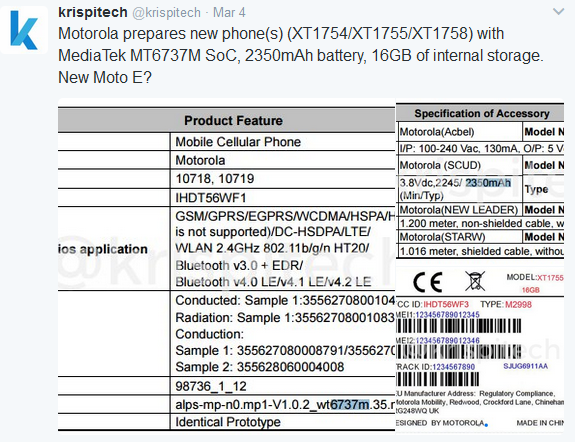 As per his tweet, the Motorola smartphones will come with MediaTek MT6737M SoC and 16GB of internal storage. They will be powered by 2350mAh battery and are expected to be from Moto E series. It is also to be noted that recently a new device with model number XT1750 got the all necessary approval from Federal Communications Commission (FCC) that regulates interstate and international communications by radio, television, wire, satellite and cable in the US. The FCC document revealed that the smartphone would be having 8GB of internal storage. Sadly no major specifications were revealed in the listing. The diagram of the FCC listing showed the label on the back of the device. As per famous leakster, Roland Quandt (@rquandt) the device will be codenamed “Watson”. He also revealed that the Moto XT1750 will be having 8GB internal storage, dual sim and 2350 mAh battery.

Earlier, some more Moto smartphones with model numbers XT1670/XT1671/XT1675/XT1676 with codename ‘Cedric’ were leaked by Roland Quandt who revealed that new Motorola smartphones will come in two variants – 2GB of RAM with 16GB of internal storage and 2GB of RAM with 32GB of internal storage. The smartphones are said to come in single and dual sim options and will run on Android 7.0 Nougat operating system. They will be backed up by 2800 mAh removable battery. The devices are also expected to feature Qualcomm Snapdragon 430 SoC.

To recall, both the recently launched Moto G5 and Moto G5 Plus boast a metal unibody and don a fingerprint sensor on the front, which also acts a home button. Both of them runs on the latest Android 7.0 Nougat and comes equipped with Google Assistant. he Moto G5 Plus comes with a 5.2-inch full HD display with a screen resolution of 1920 x 1080 pixels with Gorilla Glass 3 protection. The device is powered by a Qualcomm Snapdragon 625 processor coupled with Adreno 506 GPU. The phone comes in two options—2GB/32GB variant along with 4GB RAM and 64GB internal storage model. There is also a microSD card slot through which one can expand storage up to 128GB.

The Moto G5 on the other features a 5-inch Full HD display with a screen resolution of a 1980 x 1080 pixels. The smartphone is powered by a Qualcomm Snapdragon 430 processor coupled with Adreno 505 GPU. The phone is backed by a 2GB of RAM and an option of 16GB and 32GB internal storage which can be further expanded up to 128GB via microSD card slot.