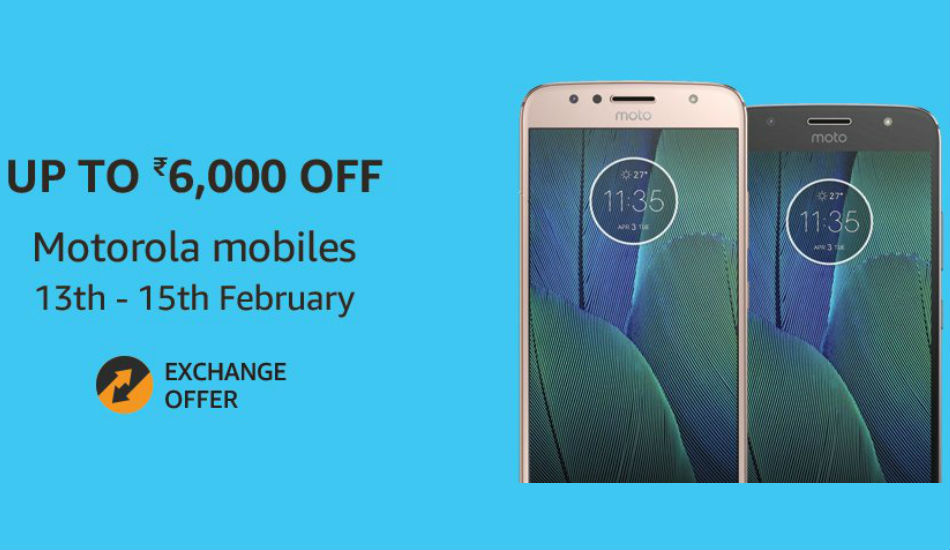 The offer is valid from February 13 to February 15 and users can available up to Rs 6,000 off on select Motorola smartphones.

Motorola has announced a temporary price cut on its range of smartphones in India on Amazon. The offer is valid from February 13 to February 15 and users can available up to Rs 6,000 off on select Motorola smartphones.

To start with the Moto G5S Plus, the smartphone was launched at Rs 16,999, is now available at a discounted price of Rs 13,999. Further, users can avail extra Rs 2,000 off on exchange. However, it is important to note that Motorola recently announced a permanent price of Rs 1000 on Moto G5S Plus.

Meanwhile, Motorola is all set to launch the latest Moto Z2 Force smartphone in India. The company has confirmed that it will be launching the flagship device on February 15. Motorola says it will be the limited edition version of Z2 Force which will come with Moto TurboPower pack.

The smartphone has recently got a thumbs up from DxoMark. As per the report by DxOMark which is a trusted industry standard for the smartphone camera and lens image quality measurements and ratings, “Motorola Moto Z2 Force smartphone camera is capable of recording images with generally good exposure and strikes a good balance between detail retention and noise reduction. It has got a Photo score of 84 points, 78 points for Video, and an overall DxOMark score of 82 points.”