Moto E20 has been spotted on Geekbench listing. The upcoming Moto E20’s model number is XT2155-1, and it is codenamed Aruba. 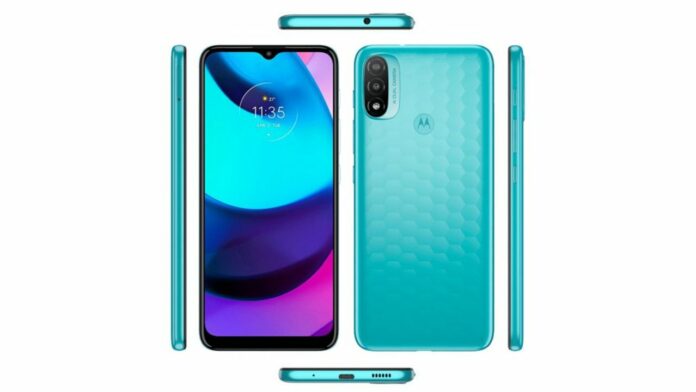 Motorola is working on a new E-series smartphone dubbed Moto E20. The renders and key specifications of the phone leaked yesterday. And now the Moto E20 Geekbench listing has been spotted.

The upcoming Moto E20’s model number is XT2155-1, and it is codenamed Aruba. The Motorola Aruba appeared on Geekbench 4 and Geekbench 5 platforms with key specifications. The listings reveal that the Moto E20 smartphone will be powered by an Unisoc processor clocked at 1.6GHz and 1.77GHz. However, the exact Unisoc chipset name is not revealed in the listing.

Moving on, the listings reveal that the phone runs on the Android 11 operating system. In addition, the device is loaded with 2GB of RAM. However, there might be more RAM variants when it launches. The listing, however, doesn’t include any other specs of the Moto E20.

The recent renders show that Moto E20 will sport a teardrop notch display with a noticeable chin. At the top, there will be a 3.5mm audio jack. The bottom edge features a microphone, a USB-C port, and a loudspeaker grille. The left side has a SIM slot, while its right edge has the voice assistant, volume, and power buttons.

For the Moto E20 specifications, the leak reveals that the phone has a 6.5-inch display with HD+ resolution. It has a dual-camera setup with a 13-megapixel primary camera, a 2-megapixel secondary lens, and an LED flash. In addition, the phone has a front camera of 5-megapixel.