Mitron vs TikTok: Can Mitron become an Indian alternative to TikTok? 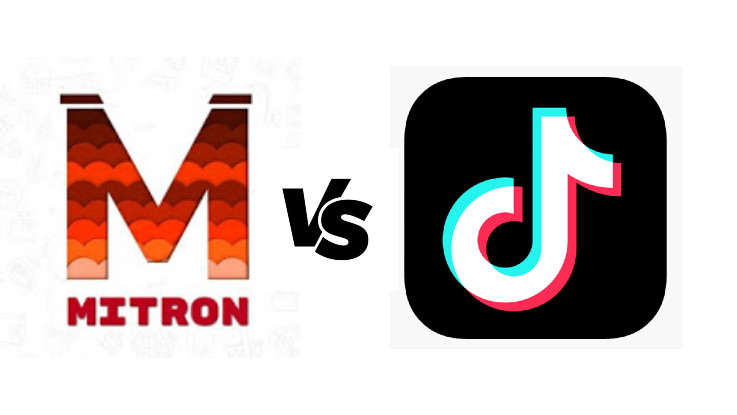 Can Mitron be the next big hit in India? Can it outlast TikTok to become the most popular short video-making app in the country? Let’s find out.

Many people in India have started voting 1-star for the app in the past few days, which resulted in a massive drop of its review rating on Google Play Store. With this, people are now searching for the Indian alternatives of this application and this is where Mitron comes into play. The short video-making app is said to be the Indian alternative of TikTok. The application is developed by an IIT Roorkee student Shivank Agarwal and it has gained popularity since its inception. The app was released a month ago and it has managed to score the benchmark of 5 lakh downloads on the Google Play Store. So, can Mitron be the next big hit in India? Can it outlast TikTok to become the most popular short video-making app in the country? Let’s find out.

What is Mitron application?

The Mitron is a short video-making application that allows users to create and post a 15-second video on the platforms. The app works on similar lines as we have seen with TikTok. Users can watch content created by different users, like them, follow them and share the videos. Furthermore, it also allows users to create an account and start making videos by themselves. The app is 8MB in size and requires an Android device to run on firmware version 5.0 or higher.

The Mitron application comes with a similar user interface as seen in TikTok. The design and templates used in the application look similar to the one present in TikTok. For example, when you go to the home page, you will have options like Home, Discover, Create, Inbox and Profile. The same layout is present in the TikTok application as well. You also get the profile name, like, comment and share button on the right side and the icons are similar to the one present in TikTok. Moreover, TikTok allows users to see the content from the Following and For You section, which is not present on Mitron.

Talking about the options, the Mitron app provides quite basic features to customise the video. You only have an option to add Audio in the video. The audio is also limited and there is no option to search for different tracks on the application. Furthermore, the app does not support any other video editing feature like crop, filters, and more. TikTok, on the other hand, provides a plethora of options to customise the video. Users can choose from hundreds of effects including changing background, adding AR Emojis and more. Furthermore, it also provides some good options for editing the video before posting it to the platform. So, this is another area where Mitron has to work really hard in order to compete with TikTok.

Talking about the experience, we used both the applications for some times and found out something really interesting. The Mitron application sometimes lags to load a video and sometimes you can only hear the audio, while the video is till. Furthermore, we noticed that most of the content present on the application is taken from TikTok. Yes, most of the videos you see on Mitron application are already present on TikTok. This is primarily because Mitron is a newborn and it is not that much popular as compared to TikTok. So, not many people have started making content for the Mitron app and some of them are simply posting their TikTok content on the Indian substitute.

Can Mitron become an Indian alternative to TikTok?

The Mitron application is currently benefiting with the anti-TikTok sentiment in the country. People are looking for the Indian alternative to TikTok and Mitron has banked on this opportunity to garner the much-needed support. However, once the whole sentiment is settled down and people actually start using the application, Mitron has to take care of few things. First of all, it has to make the user interface refined and bug-free in order to help people use the app seamlessly. Secondly, the app needs to provide some basic editing tools so that people can easily customise the videos. We all agree that the Indian-made app is making on the internet, but at its current situation, it has to go a long way to give a stiff competition to TikTok or become the much-needed alternative of the Chinese application.