Microsoft launched a new Microsoft Surface laptop which looks to be a direct competitor to Apple MacBook Air and Google’s latest Chromebook.

Microsoft has been up against the likes of Apple and Google for quite some time now. While its partnership with Nokia never reaped the desired fruits, the company has also struggled to go one on one with Apple’s MacBook series or even Google Chromebook. However, at its EDU event yesterday, Microsoft launched a new Microsoft Surface laptop which looks to be a direct competitor to Apple MacBook Air and Google’s latest Chromebook. Besides, the company also introduced the new Windows 10S which only runs Microsoft Apps. Let’s break down the entire event.

Microsoft Surface Laptop
Surprisingly, Microsoft has retained the same size and has opted to go for a rather premium design for the new Surface Laptop. The device comes with a 13.5-inch PixelSense display with a resolution of 2256 x 1504 pixels (3:2 Aspect Ratio) and edge to edge corning gorilla glass protection.

This machine runs on Windows 10S which is a toned down version of Windows 10 focusing more on the students. Also launched at the event, Windows 10S will only run Microsoft Apps. Apart from this, the Surface Laptop also comes with a 720p webcam which supports Windows Hello IR Camera for facial recognition login.

For the stamina, the company claims that it can easily last for 14.5 hours on a single charge which is probably four hours of extra juice over its competitor 13-inch MacBook Pro. For the audio, Microsoft has given Omnisonic dual speakers coupled with Dolby Audio Premium technology. In terms of connectivity, Microsoft strangely skipped the USB Type-C port and instead has gone for a USB 3.0 port. 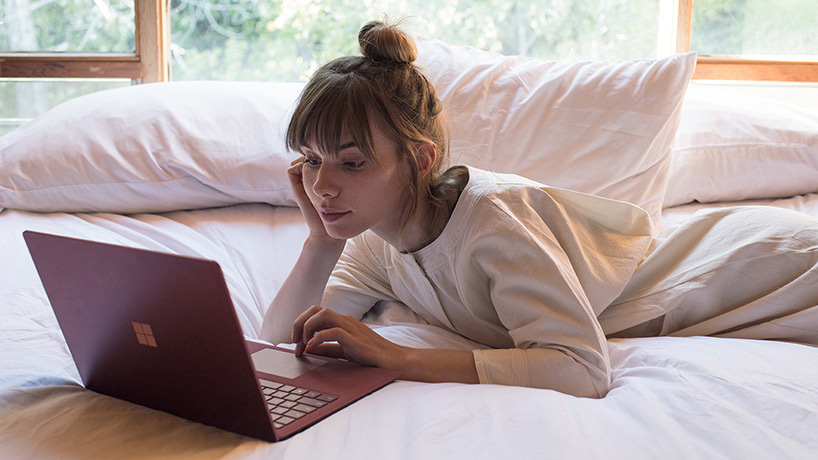 Microsoft Surface Laptop Price
The base model i.e. the Core i5 variant with 4GB RAM and 128GB SSD is priced at $999 while the 8GB RAM and 256GB SSD variant will cost you $1,299. This variant will sell in four colour options including Burgundy, Platinum, Cobalt Blue, Graphite Gold.

Microsoft Surface Laptop is already up for pre-orders in the United States, Australia, New Zealand, Austria, Belgium, Denmark, Finland, France, Germany, Ireland, Italy, Luxembourg, Netherlands, Norway, Poland, Portugal, Spain, Sweden, Switzerland and the UK via Microsoft Store, microsoftstore.com and BestBuy.com. We wouldn’t be able to comment on the Indian availability, as of now.