Micromax in 1 launching in India on March 19 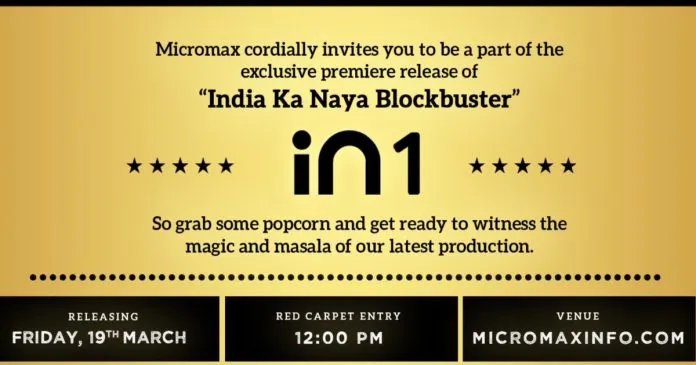 Micromax IN 1 will be the third smartphone in the In series after Micromax In Note 1 and In 1b.

Micromax is all set to launch a new smartphone for the Indian market. The brand will be launching Micromax in 1 in the country on March 19.

Micromax IN 1 launch has been confirmed by an invite shared by the company. The launch invite however does not reveal any information on the specs of the upcoming smartphone.

As per our exclusive report earlier, the upcoming smartphone by Micromax could be based on MediaTek Helio G95 processor. MediaTek Helio G95 is a mid-range Gaming-centric processor was announced last year. The Helio G95 consists of a pair of Arm Cortex-A76 CPUs operating up to 2.05GHz, paired with six Cortex-A55 power-efficient CPUs, with upgraded Arm Mali-g76 MC4, operating at up to 900 MHz.

Micromax IN 1 will be the third smartphone in the In series after Micromax In Note 1 and In 1b. Micromax launched the In 1b for Rs 6,999 and Note 1 for Rs 10,999. Let’s look at their specifications.

The In Note 1 is powered by the Mediatek Helio G85 chipset clocked at 2.0Ghz. The device comes with 4GB of RAM and 64GB or 128GB of storage.The phone also supports microSD cards of upto 256GB storage for expansion. The In Note 1 runs on stock Android 10 out-of-the-box. It has a rear-mounted fingerprint sensor.

Micromax IN 1b specifications

Micromax in 1b features a 6.52-inch HD+ display and will be powered by the MediaTek Helio G35 paired with 2GB or 4GB of RAM and 32GB or 64GB of storage. It also features a fingerprint sensor at the back. It is backed by a 5,000mAh battery with 10W charging and reverse charging support.

Micromax in 1bruns on Stock Android OS with 2 years of guaranteed OS updates. It has a dual rear camera setup consisting of a 13MP primary camera along with a 2MP depth sensor. On the front, the device has an 8MP camera for selfies.