Mi Pad 5 spotted on Geekbench ahead of launch tomorrow

Mi Pad 5 has been spotted on the on the Geekbench benchmarking site. It will be powered by an 3.19Ghz octa-core Snapdragon 870 chipset. 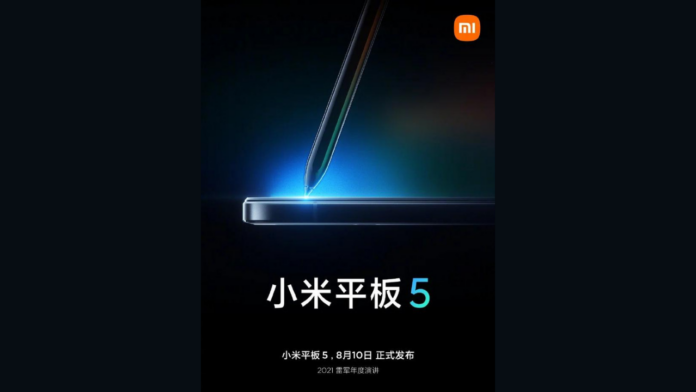 Xiaomi Mi Pad 5 series of tablets will be launching tomorrow in China. Now ahead of the launch, the Mi Pad 5 has appeared on the Geekbench benchmarking site. The listing has revealed key specifications of the upcoming smartphone.

Xiaomi phone with model number M2105K81AC has appeared on the Geekbench benchmarking site. As per the Geekbench listing (via), the Mi Pad 5 will be powered by an 3.19Ghz octa-core Snapdragon 870 chipset which will be paired with Adreno 650 GPU. It will pack 6GB of RAM.

Further the listing reveals that the tablet will run Android 11 out of the box. In the single-core and multi-core tests of Geekbench, the tablet has scored 997 and 3181 points respectively.

As per the leaks, the Mi Pad 5 will feature a 10.95-inch LCD display with 2K resolution. It will come with a 120Hz refresh rate. The device is expected to arrive with support for a stylus and an optional keyboard.

Fo the battery, there will be an 8,720mAh battery with 67W fast charging support. Talking about the camera details, there will be a 48-megapixel camera dual-camera system.

There will be a side-facing fingerprint scanner. It measures 8.1mm in thickness and weighs 510 grams

Along with the tablets launch, the company is also said to launch Mi Mix 4 smartphone. The device may arrive with 120W fast charging support. In addition, the device may also carry support for 70W or 80W wireless charging. The phone is said to pack Snapdragon 888 chipset.

As per earlier leaks, the phone will launch with 8GB and 12GB RAM options. In addition, both variants will have 256GB of internal storage. The device will most likely support 5G, considering it’s one of the top-of-the-line devices from Xiaomi. The Mi MIX 4 could pack a 5,000mAh battery.