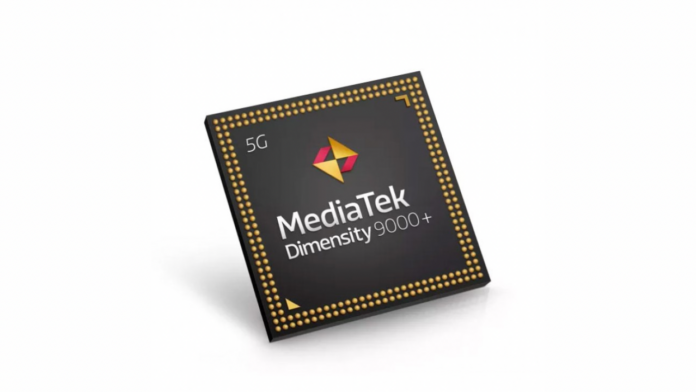 While only one smartphone with Dimensity 9000 processor has launched in India so far, MediaTek is ready to deploy an even more powerful version of this processor and it is the Dimensity 9000+. The new chip looks similar to its lesser powerful sibling but does delivery improvements in key areas.

However, it still equips the same 1+3+4 setup with three Cortex-A710 cores and four high-efficiency Cortex-A510 cores. The boosted GPU is the Mali-G710 MC10. Furthermore, the network modem has also been updated to enable support for up to 7Gbps downlink speeds. Apart from this, the rest of the specifications of the chip essentially remain identical.

The MediaTek Dimensity 9000+ is also made using TSMC N4 (4nm-class) production. It supports LPDDR5x memory at bandwidths of up to 7,500 Mbps. Moreover, there’s MediaTek’s fifth-generation APU with a total of six cores handling AI processing. It is claimed to offer four times the performance and power efficiency compared to its previous generation.

MediaTek says that devices featuring the Dimensity 9000+ chipset will hit the shelves sometime in Q3 2022. The company is yet to share the names of the OEMs that will be using the chips on their upcoming flagships.