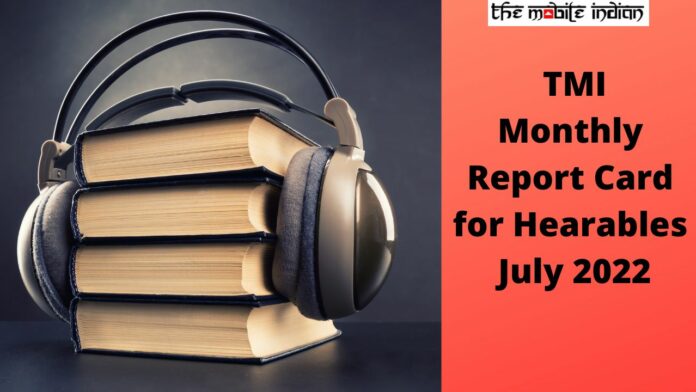 It was a boom time for TWS and neckband brands in July. The month saw the biggest number of launches so far seen in any month in 2022. Several brands launched products at different price points, making this the busiest hearables month of the year so far. These were the main trends in a month in which hearables became the rage:

A record number of launches

July saw the highest number of TWS and neckband launches of the year so far. In fact, the launches of hearables have been rising as the year has gone on, rising from 14 in March to 21 in April and 26 each in May and June. July, however, was comfortably ahead of all these, with a remarkable 35 launches.

There may be more TWS than ever before in the market, but that does not seem to have affected their popularity. Barring February, TWS has comprised more than 60 per cent of the total wearables launched every month in 2022. This did not change in July, with 23 of the 35 hearables launched in the month being TWS, a percentage of 66 per cent, the second highest since April, which had seen 76 per cent.

The Indian market continues to be dominated by budget-friendly TWS and neckbands. This trend continued in July, with 63 per cent of the hearables launched in July being priced below Rs 2,000. As in previous months, the Rs 1,000 – Rs 2,000 segment saw the most launches (15), with 20 per cent (7 launches) being in the sub-Rs 1,000 segment.

The premium segment is back

After a rather quiet period (there was only one launch in June and only 2 each in May and April), premium segment hearables returned to the Indian market in larger numbers. July saw four hearables launched in the price segment above Rs 10,000 – the joint highest in the year so far, along with February. There was, however, only one launch in the Rs 4,000 – Rs 10,000 segment, which remains the most unpopular segment in terms of launches – the highest number seen in a month this year in it has been 3 (May). The Rs 2,000 – Rs 3,000 segment continued to have a significant presence with 6 launches, which is 17 per cent of the launches in the month. The Rs 3,000 – Rs 4,000 segment continued to be relatively quiet, with just two launches.

Just as a relatively new brand, Arrow dominated launches in June, July was a month in which another new name led the field. U&i was the launch leader in July with five launches. Interestingly, the brand went against the general trend and launched three neckbands and two TWS. All its neckbands were in the Rs 2,000 – Rs 3,000 segment. Boat, pTron and Fire-Boltt each had three launches in the month.

Big brands are back in business…

June had seen most of the bigger names in audio staying clear of the market, but July saw a number of them return to the market with launches. Sony made its first launch of 2022 (a neckband), and there were also first launches from Belkin and Google. Sennhesier, JBL, Oppo, Realme, Blauplunkt, Redmi and Dizo also released devices. The big brands definitely came to the audio party in July, and interestingly, most of their releases were at slightly higher price points and in the TWS category.

…and so is ANC

After a period in which it had seemed to have gone out of favour, active noise cancellation (ANC) returned to the market in a big way in July. Ten out of 35 devices (Slightly less than a third) of the hearables released in the month came with ANC. Interestingly, however, ANC was mostly seen at relatively higher price points and was hardly present in any device below Rs 2,000, which seems to indicate that after a brief period at lower price points, it is now becoming a feature more likely to be seen in the mid and higher price segments.

The acceleration in hearable launches seen in July seems set to continue in August. Even as this is being written, we have already seen launches from Sony and OnePlus, and more are expected as the month progresses. Will we see more launches in the rather quiet Rs 4,000 – Rs 10,000 region or will the market continue to stay with the lower price points? Stay tuned.