Lenovo Z5s to be announced on December 18 in China 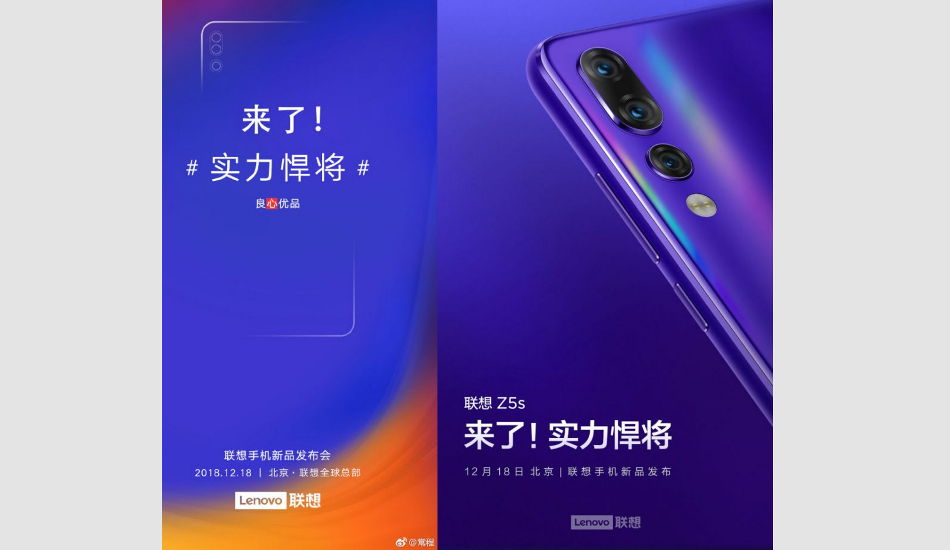 The Lenovo Z5s will sport an in-display front-facing camera which will be similar to the upcoming Samsung Galaxy A8s and Huawei Nova 4 smartphones.

Lenovo was expected to launch Lenovo Z5s on December 6 in China. However, the phone was not announced yesterday. Now, the Lenovo Group VP Chang Cheng has released a new poster which confirms that the Lenovo Z5s will now be launched at the Lenovo’s global headquarters in China on December 18.

The company on its official Weibo account has shared an image to which shows the phone in gradient colour glass at the rear and vertically arranged triple rear camera setup as well. An LED flash is placed below the triple camera setup.

The Lenovo Z5s will sport an in-display front-facing camera which will be similar to the upcoming Samsung Galaxy A8s and Huawei Nova 4 smartphones. Samsung will be launching the Galaxy A8s in China on December 10, while Huawei will be launching the Nova 4 on December 17. The cutout for the front camera in Lenovo Z5s will be at the top center position instead of the top left corner as in Samsung Galaxy A8s and Huawei Nova 4 smartphones.

As per earlier leaks, the Lenovo Z5s will feature a 6.3-inch full HD+ display with 18:9 aspect ratio. It is also expected that the Lenovo Z5s LCD display will be manufactured by BOE, similar to the Samsung Galaxy A8s and Huawei Nova 4. Lenovo Z5s is rumoured to be powered by an 11nm Qualcomm Snapdragon 675 octa-core processor. On the software front, the smartphone will run Android 8.1 Oreo-based ZUI 10 out of the box and it is packed with a 3,120 mAh battery with support for 18W fast charging.