Samsung Galaxy A8s with 6.39-inch Infinity-O display to be launched on December 10 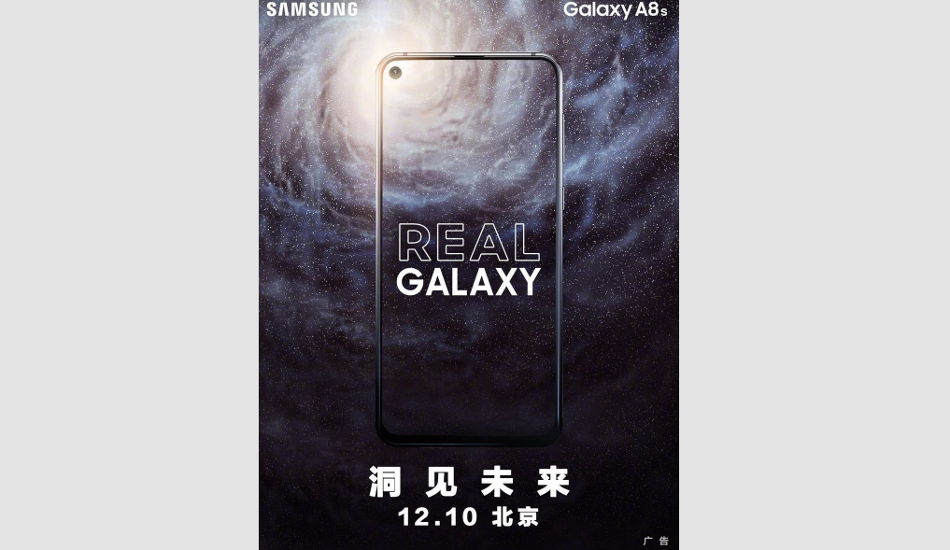 This will make Samsung to bring out the first phone with a screen hole.

Samsung has announced that it will announce the upcoming A8s smartphone with an in-display camera and Infinity-O display on 10 December. The announcement comes after Huawei confirmed to launch Nova 4 with in-display front-facing camera on 17 December. This will make Samsung to bring out the first phone with a screen hole.

The company has posted a poster revealing the launch date on the official Weibo account of Samsung mobile. The poster shows the launch date as well as a selfie camera punched onto the display at the top-left corner. The Samsung Galaxy A8s was recently also certified at the Federal Communications Commission (FCC) in the US hinting that the handset also be launched in the US soon.

As per previous reports, Samsung is expected to maintain a flat screen with Infinity-O display. The Samsung Galaxy A8s will reportedly feature a 6.39-inch TFT LCD display manufactured by BOE with a screen aspect ratio of 19.5:9. It will be powered by Snapdragon 710 processor coupled with 6GB RAM and 128GB internal storage

The device will run on Android 8.1 Oreo operating system and be backed by a 3400mAh battery. The Galaxy A8s is expected to come with a vertically aligned triple rear camera setup with a combination of a 24-megapixel primary camera, and 10-megapixel and 5-megapixel cameras. The front camera within the display hole at the top left corner is expected to be a 24-megapixel sensor. The phone is said to ditch the 3.5mm headphone jack as well.