The Lenovo Z5s Ferrari Superfast Edition will be powered by the latest Qualcomm Snapdragon 845 processor, which is clocked at 2.8GHz.

Lenovo is all set to launch its latest smartphone, the Lenovo Z5s, in China. Now it seems that the company is planning to introduce a limited edition of the upcoming smartphone, which could be a first in the smartphone industry to feature massive 12GB of RAM.

As per a leak of the ‘About Phone’ of the upcoming smartphone has been shared online and it was reported by Slashleaks. The section shows that the smartphone will be named as Lenovo Z5s Ferrari Superfast. This is interesting as OnePlus also tied up with McLaren to introduce OnePlus 6T McLaren Edition that comes loaded with 10GB of RAM. 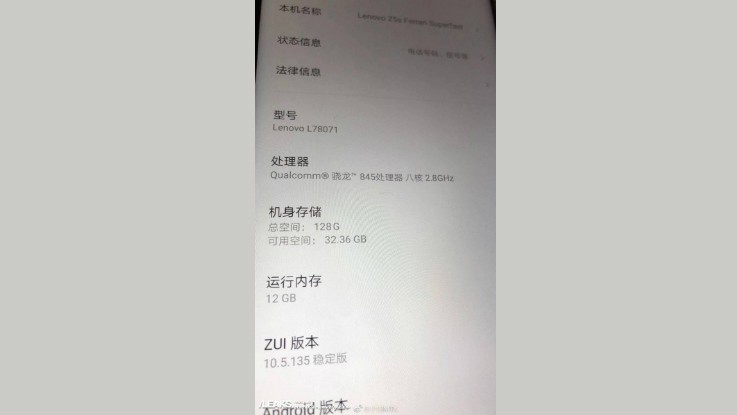 Moving on to the leaks, the photo shows that the device will be backed by a massive 12GB of RAM. If this is believed to be true then it will become the first smartphone to sport such a high amount of RAM. The Lenovo Z5s Ferrari Superfast Edition will be powered by the latest Qualcomm Snapdragon 845 processor, which is clocked at 2.8GHz. The phone will feature 128GB of internal storage. The upcoming smartphone will run on ZUI 10.5, which could be based on Android 9.0 Pie. However, there is no way to authenticate this specs, so we suggest you take this report with a pinch of salt.

Previously, multiple teasers of the upcoming smartphone were posted on Weibo. It revealed that the upcoming might come with a new Qualcomm Snapdragon 679 processor, which is yet to be announced. The phone will run on Android 9.0 Pie and it will feature triple camera setup at the back.

Lenovo Z5s confirmed to be launched on December 6

Lenovo Z5s to be announced on December 18 in China