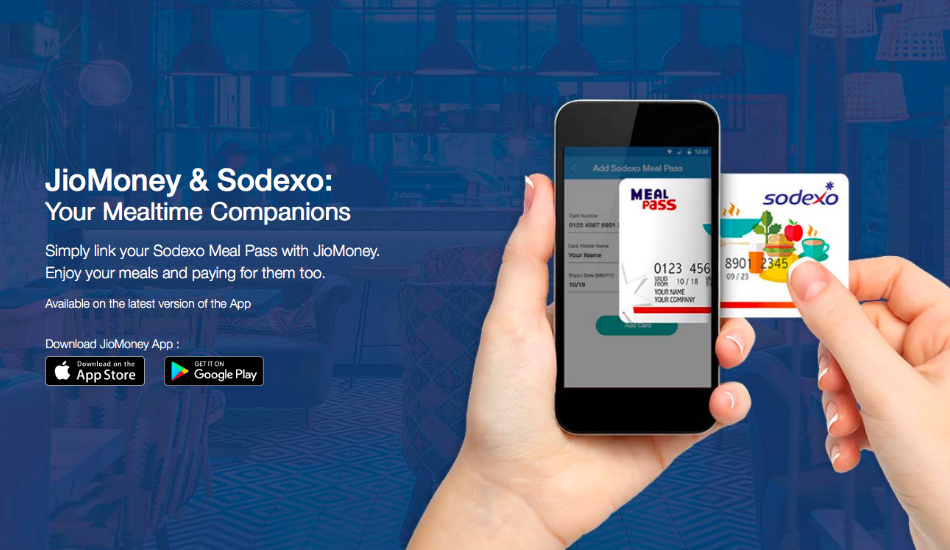 Sodexo users would no longer need a physical card when purchasing food with a meal card and can pay the same using JioMoney.

Reliance Jio today teamed up with meal benefits company Sodexo to link the latter’s meal card accounts with a JioMoney for easy payments and other benefits. With this move, Sodexo users will be able to use JioMoney’s payment solutions to pay for food while Sodexo meal cards will also be accepted for similar services in JioMoney.

The French firm has partnered with several food chains and delivery services in India in recent month to help shift the user base from paper coupons to digital cards. The deal with Reliance Jio will be another step towards digitization since Sodexo customers using JioMoney wouldn’t need to carry their Sodexo Meal Cards anymore. Users would now be able to link their passes to the JioMoney app on their smartphone and add the required balance to these meal cards when they want to.

The service has already been launched in Mumbai and Sodexo plans to add 10,000 new merchants to its already vast network of 100,000 though this partnership. The rollout is expected to happen in over eight cities in the country and will expand once it’s well received. The French meal benefits company has already generated close to 3 million users in India and will look to enable JioMoney solution at all its merchants across the country.

Speaking about the partnership, CEO of Sodexo India, Stephane Michelin said “At Sodexo, we constantly strive to enhance the consumer experience by expanding the ways to use the Sodexo Meal card within our proprietary network. Our endeavour has been to improve the retail experience for our 3 million daily users. With this partnership, JioMoney’s MPOS system will help segregate the food & non–food items among standalone, smaller merchants, which will further strengthen Sodexo’s position as a compliant meal benefit solution in the country.”

JioMoney’s Business Head, Anirban S Mukherjee also commented by saying “Jio’s partnership with Sodexo will further Jio’s endeavour to deliver the benefits of evolving digital technologies to every Indian and allow them to live Digital Life to the fullest. The integration will bring convenience and new digital transaction options for both JioMoney and Sodexo users in India. Going forward both brands will leverage core strengths, develop synergies and expand their reach and presence in India’s growing digital ecosystem”.