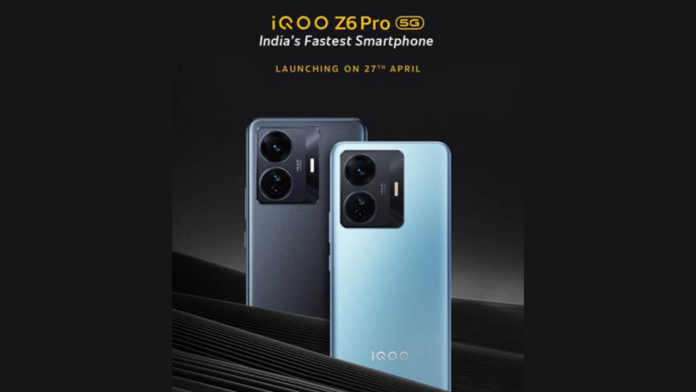 iQOO today announced that its latest smartphone in the Z series, the iQOO Z6 Pro will launch in India on April 27. Moreover, the brand has also confirmed the design and some of the features of the smartphone including its charging speed, its processor and the colour options it will be available in.

The Chinese brand has confirmed that the smartphone will be powered by the Qualcomm Snapdragon 778G 5G Mobile Platform. It will sport 66W FlashCharge and 32923mm2 Flagship VC Liquid Cooling along with what iQOO claims to be the highest AnTuTu score of 550K+ in segment. Apart from this, the upcoming iQOO Z6 Pro will be available for purchase on Amazon.in and iQOO.com in the Rs 25,000 segment.

As for the design, it seems to be similar to what we have been seeing with a bunch of Realme, Oppo, Vivo and OnePlus smartphones lately. The iQOO Z6 Pro will launch in blue and black colour options. It seems to have a triple camera setup out of which the primary sensor has its own camera ring while the other two sensors will be placed inside a camera ring below it.

Meanwhile, iQOO recently introduced the iQOO Neo 6 in China which is the latest flagship from the company. It sports a flat 6.62-inch AMOLED display which has a refresh rate of 120Hz, and a peak brightness of 1300 nits and a 91.4% screen-to-body ratio. There’s an in-display fingerprint sensor for security. The device is powered by the Snapdragon 8 Gen 1 SoC and gets up to 12GB of LPDDR5 RAM and up to 256GB of UFS 3.1 storage.