iQOO Z5 India launch has been confirmed. The device will launch in the country on September 27th at 12 noon. 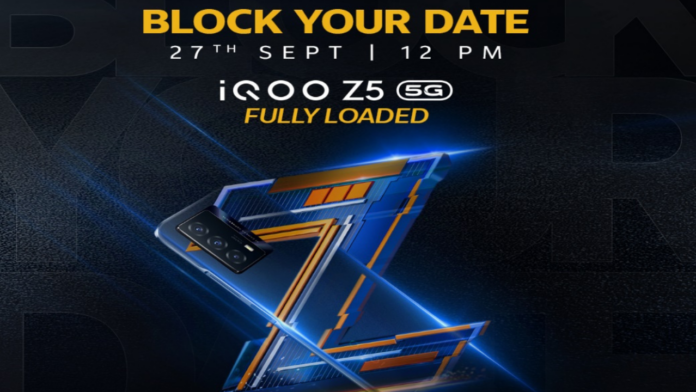 Rumours of iQOO Z5 launch in India have been floating around since August and the company has now officially confirmed the arrival of the smartphone in the country. The launch of the device has been set for as soon as this month.

IQOO has said that the iQOO Z5 will arrive in India on 27th September at 12 noon. It will act as the successor to the iQOO Z3 launched in India earlier this year. The teaser image of the rear of the smartphone shows a rectangular camera array. In addition, there’s a side-mounted fingerprint sensor that may be pointing towards an LCD panel and not an AMOLED one.

The IQOO Z5 is launching in China on September 23rd. It has been confirmed to arrive with the Qualcomm Snapdragon 778G chipset.

A GSMArena report states that the iQOO Z5 will be priced under Rs 30,000 in India. It is touted to be the “segment’s best performance and gaming device”. It has also been confirmed that it will sport a 120Hz panel. Furthermore, it will come with a 240Hz touch sampling rate with DCI-P3 colour gamut and HDR10 support.

The iQOO Z5 will come equipped with dual stereo speakers, iQOO has confirmed. In addition, it will carry support for Hi-Res Audio and Hi-Res Audio Wireless, which will elevate the audio experience further. Furthermore, it should have LPDDR5 RAM and UFS 3.1 storage.