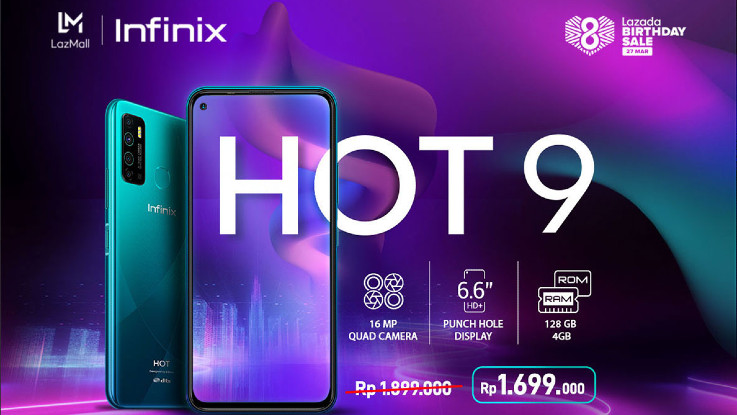 Infinix has announced the launch of a new budget-centric smartphone, the Infinix Hot 9, in Indonesia. The smartphone comes with a price tag Rp 1,699,000, which roughly translate to Rs 7,800.

The smartphone is available for purchase in Matte Black, Cyan, Violet and Light Blue colour options. Coming to the specifications, the Infinix Hot 9 is loaded with a 6.6-inch HD+ display with a screen resolution of 1520 x 720 pixels. The smartphone is powered by a MediaTek Helio A25 octa-core processor.

The phone runs on Android 10 with company’s custom XOS 6.0 running on top of it. The Infinix Hot 9 is backed by a 5000mAh battery with 10W fast charging support. There is a fingerprint sensor and it supports Face Unlock, DTS Audio Technology, AR Stickers and more.

Meanwhile, Infinix introduced Infinix S5 Pro in India for Rs 9,999. Infinix S5 Pro features a 6.53-inch Full HD+ display with a screen resolution of 2220 x 1080 pixels along with 480 nits brightness, a pixel density of 394ppi and 91 per cent screen-to-body ratio. The smartphone is powered by a 2.35GHz octa-core MediaTek Helio P35 processor along with 4GB of RAM and 64GB of internal storage that is further expandable via microSD card.