‘Indians consume more than 11GB of data per month’

India has witnessed an increase of 47 per cent in the overall data traffic. As per the latest report by Nokia’s annual Mobile Broadband India Traffic Index, 4G constituted 96 per cent of total data traffic consumed across the country. 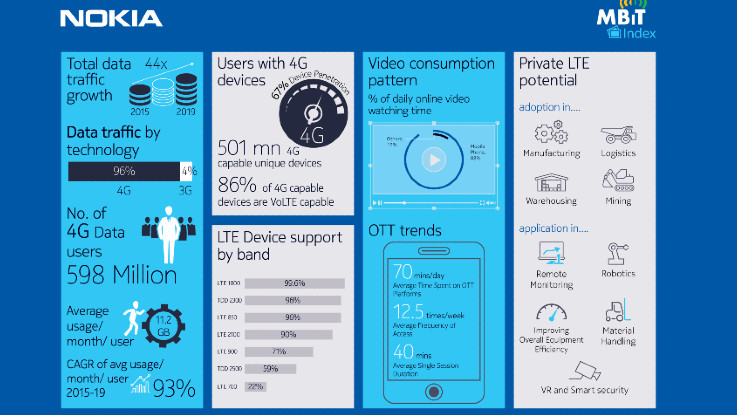 The report further added that India data traffic recorded a growth of 44 times in the last four years, which is one of the highest in the world. It says that broadband penetration is 47 per cent, which is lower than China (95 per cent) and the European market.

The increase in data consumption was fueled by video consumption. The report adds that with an increase in the number of Over-the-Top (OTT) platforms, regional content and overall video consumption went up. Other innovations by OTT players like sachet pricing and mobile-only packs has helped to bring an average time spent of 70 minutes per day.

Furthermore, the number of 4G handsets devices grew 1.5x to reach 501 million units due to the availability of a range of feature-rich models and competitive prices, the report adds. “We believe the migration of subscribers to 4G will continue to drive broadband growth in the country. The upcoming 4K/8K videos and Industry 4.0 solutions that promise to enhance productivity and bring down expenses for the industries across different verticals, demand ultra high speed and extremely low latency. The Indian telcos will need to consider other connectivity solutions to leverage the new opportunities and to address the growing data consumption,” said, Sanjay Malik, Senior Vice President & Head of India Market, Nokia.