The company has not revealed the pricing of the devices, but The Verge reports that Gear Sport will come with a price tag of $349, while the Gear Fit2 Pro will be priced at $199.

Samsung has announced three new devices to its wearable portfolio with the launch of Gear Sport, Gear Fit2 Pro and Gear IconX (2018) at IFA 2017. However, the company has not revealed the pricing of the devices, but The Verge reports that Gear Sport will come with a price tag of $349, while the Gear Fit2 Pro will be priced at $199.

The Gear Sport and Gear Fit2 Pro come loaded with some interesting features. To start with, both of them are 5 ATM certified for water resistance and both come with Speedo On swimming training app, which allows users to track key swim metrics including lap count, lap time, stroke type and more. The Gear Sport and Gear Fit2 Pro features real-time heart rate monitoring as well. Both of them also features automatic activity detection, which recognises walking, running, cycling and performing dynamic activities like dancing, playing basketball and more. Lastly, both the wearables come with personalised motivation with tailored goals and alerts.

Starting with the Gear Sport, the wearable comes with military-level durability and will be available in Blue and Black colour variants. The smartwatch features a 1.2-inch circular Super AMOLED display with a screen resolution of 360 x 360 pixels and a pixel density of 302ppi. It also features Always on Display and comes with Corning Gorilla Glass 3 protection. 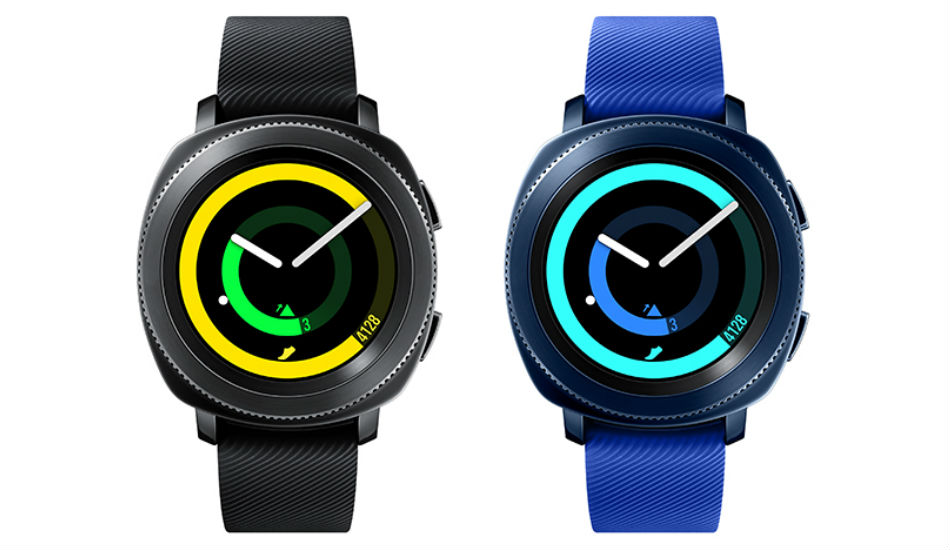 On the hardware front, the Gear Sport features a 1.0 GHz dual-core processor and it runs on Tizen OS. The watch comes with 20mm strap and has a 4GB of internal storage along with 768MB of RAM. The device is juiced up by a 300mAh battery and it also supports wireless charging. On the connectivity front, it supports Bluetooth v4.2, Wi-Fi b/g/n, NFC and GPS/GLONASS/Beidou. The device measures 42.9 x 44.6 x 11.6 mm and weighs 50g (without the band).

The major highlight of the Gear Fit2 Pro is the advanced built-in GPS tracking. The device features an ergonomic band and it will be available in Black and Red colour options. The fitness tracker features a 1.5-inch Curved Super AMOLED display with a screen resolution of 216 x 432 pixels and a pixel density of 310ppi, which is protected with Corning Gorilla Glass 3. 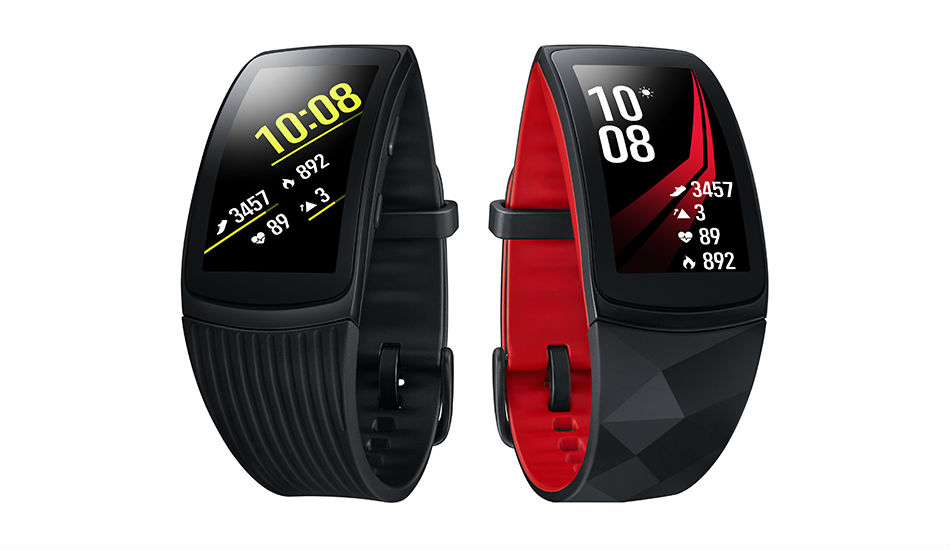 The device comes loaded with 1.0 GHz dual-core processor along with 4GB of internal storage and 512MB of RAM. The device comes in two strap options of small (size of the wrist: 125~165mm) and large (size of the wrist: 158~205mm). The fitness tracker runs on TizenOS and is backed by a 200mAh battery with Pogo type charger. On the connectivity front, it supports Bluetooth v4.2, Wi-Fi b/g/n, NFC and GPS/GLONASS/Beidou. The device measures 25 x 51.3 mm and weighs 34g (large) and 33g (small).

Samsung has also introduced its next-generation of IconX cord-free earbuds during the event. The latest wireless earbuds come loaded with Bixby voice assistant and with a simple tap and hold of the earbud, one can use his/her voice to control music or phone.

The device also tracks the running routines as well and it features a standalone Running Coach function which can be activated by simply tapping the earbud to provide in-ear audio7 exercise status updates. The earbuds are available in Black, Gray and Pink colour variants.

The Gear IconX (2018) comes with Bluetooth 4.2 connectivity option and it has a 5.8pi dynamic driver for better audio experience. You also get a 4GB of memory on each earbud. The device offers 7 hours of play time on standalone mode and 5 hours of play time on Bluetooth mode. It also comes with a charging case that is backed by a 340mAh battery and support micro USB 2.0 and Type-C port.