The Mediapad M5 is expected to be powered by HiSilicon’s octa-core Kirin 960 chipset coupled with 4GB of RAM.

Huawei is gearing up to launch the next-generation of MediaPad tablets soon. The tablets have been subjected to various leaks in the past and the recent comes in the form of leaked renders that reveals some design aesthetics of the upcoming devices.

The leaked renders were first spotted by SlashLeaks and it will reveal that tablets from all angles. To start with, Huawei MediaPad M5 tablet will come in 8.4-inch and 10.1-inch displays. The render shows both the tablets will feature some minimal side bezels. The top will house a front-facing camera, while at the base, there will be a home button, which could also act a fingerprint sensor. 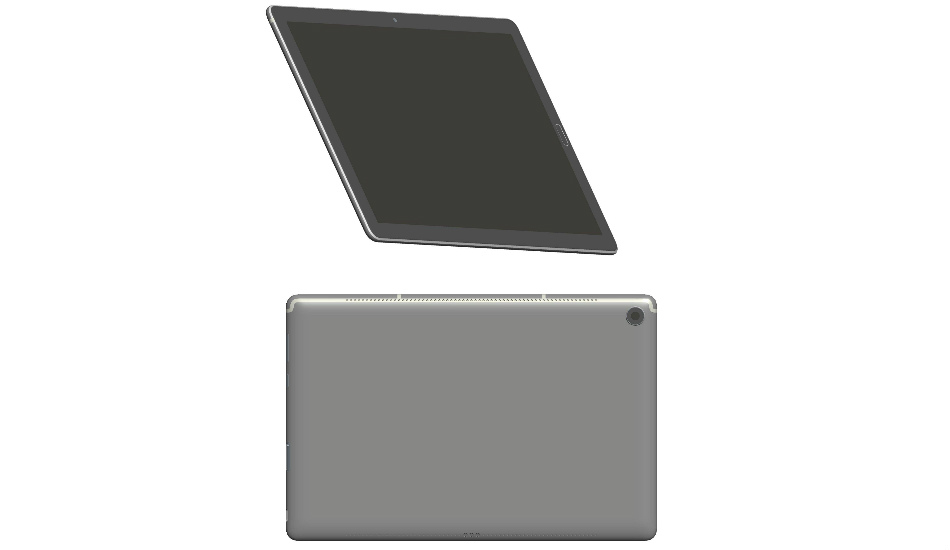 At the back panel, both the tablets houses a rear-facing camera at the top left corner and it is slightly raised. One can also see antenna lines running on the top and bottom panel of the back. The power buttons are situated at the right side along with volume controls.

Interestingly, the renders show that the tablets will feature a long line of a speaker at the base and at the top. The base also houses a USB Type-C port, though there is no headphone jack. This means that the tablets could ditch a traditional 3.5mm audio jack.

The Mediapad M5 is expected to be powered by HiSilicon’s octa-core Kirin 960 chipset coupled with 4GB of RAM. It will run on Android Oreo-based EMUI 8.0 operating system. The tablet is expected to feature a fingerprint scanner and Cat. 4 LTE modem. Other features include a 3.5mm audio jack and a USB-C port.Huawei has not officially confirmed the existence of Mediapad M5, but the company may officially announce the MediaPad M5 next month during its MWC 2018 event in February.