As per the Wi-Fi certification, the Huawei MediaPad M3 Lite will support dual-band Wi-Fi a/b/g/n (2.4GHz,5GHz) and Wi-Fi Direct connectivity features. Sadly, the listing does not show any specifications except that the device will be powered by Android 7.0 Nougat operating system. The listing carries the certification ID WFA71556 and the date of certification being 24th April 2017. 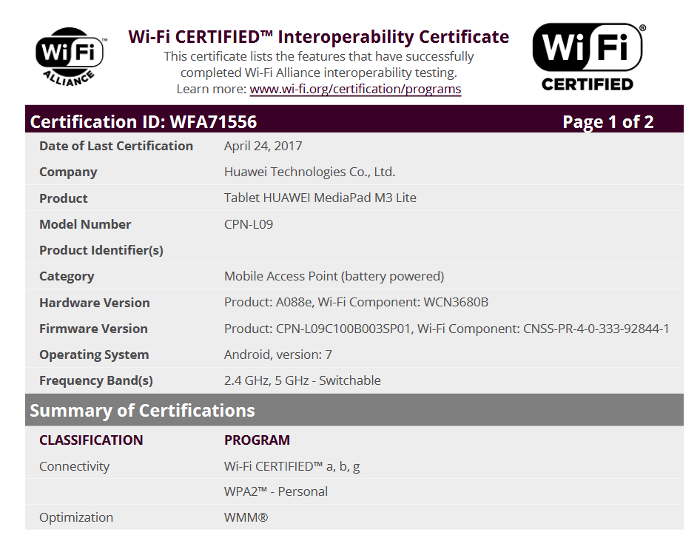 The recently launched Huawei MediaPad T3 7 features a 7-inch IPS display with a resolution of 1024 x 600 pixels offering a pixel density of 170ppi. Underneath, the device is powered by a 64-bit MediaTek MTK MT8127 quad-core processor clocked at 1.3GHz with Mali 450 GPU. The tablet comes with two storage options, one with 1GB RAM with 8GB internal storage and the other with 2GB RAM and 16GB internal storage. Both the variants offer expandable storage slot of 64GB capacity. The MediaPad T3 7 runs on Android 6.0 Marshmallow operating system with EMUI 4.1 on top of it.