Huawei Mate 20 Pro to launch in India next month, will be Amazon exclusive

The Mate 20 Pro comes with a price tag of €1050, which roughly translate to Rs 88,767. It was launched in Emerald Green, Midnight Blue, Classical Black, Pink Gold and Twilight colour options.

Huawei has recently introduced its latest flagship smartphone, the Huawei Mate 20 Pro, at an event in London. Now, it seems that the company is all set to bring the latest device to Indian shores. The company has announced that it will launch the latest Mate 20 Pro smartphone in India next month.

Amazon India has listed the teaser page of the Huawei Mate 20 Pro on its official website, hinting that the launch is imminent. The page has ‘Notify Me’ button as well. This simply means that the latest flagship device from Huawei will be exclusively available on Amazon. To recall, the Mate 20 Pro comes with a price tag of €1050, which roughly translate to Rs 88,767. It was launched in Emerald Green, Midnight Blue, Classical Black, Pink Gold and Twilight colour options. 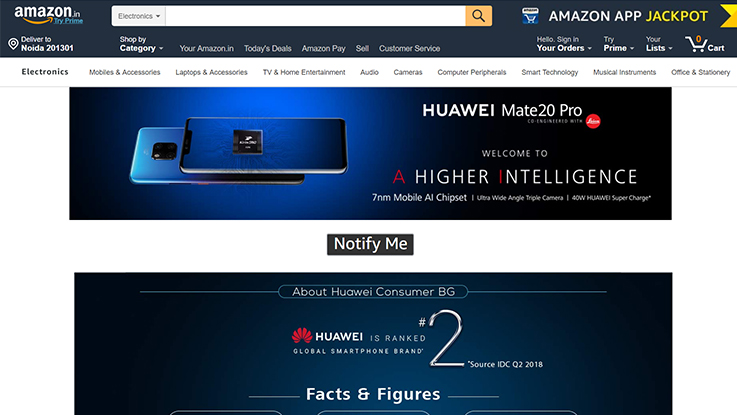 The major highlight of Huawei Mate 20 Pro is the triple-camera setup at the back. The primary sensor comes with a 40-megapixel lens with a f/1.8 aperture along with 20-megapixel ultra-wide angle with f/2.2 aperture and an 8-megapixel telephoto lens with f/2.4 aperture. For the front, there is a 24-megapixel shooter for selfies and video calling.

It is backed by an 8GB of LPDDR4X RAM and 256GB of internal storage with an expandable option of 256GB via microSD card slot. Interestingly, it is first smartphone that comes loaded with nano microSD card support. The phone comes with an in-display fingerprint sensor and Apple iPhone X-like facial recognition. It runs on Android 9.0 Pie and is backed by a 4200mAh battery with fast charging, wireless charging and reverse wireless charging support.

Huawei Mate 20 Pro leak leaves nothing left to imagine about, including pricing