The leaked roadmap reveals that the company will launch new smartphones, wearable, wireless router and a 360-degree camera.

Huawei is currently working on the latest flagship smartphone, the P11, however, a recent leak has now revealed the 2018 roadmap that reveals company’s upcoming product lineup. The leaked roadmap reveals that the company will launch new smartphones, wearable, wireless router and a 360-degree camera.

According to a report by Gadgety, the slide was presented during a brief session with Rami Hazan, Chief Executive Officer of Telecom Divison at Electra Consumers Products, which is a licensed distributor in the Middle Eastern country. The slide reveals that in Q1 of 2018, Huawei will kickstart the shipment of Mate 10 series that include Mate 10 Pro and Mate 10 Lite. Interestingly, the company will also launch two new smartphones that are codenamed as Maya and Salina. 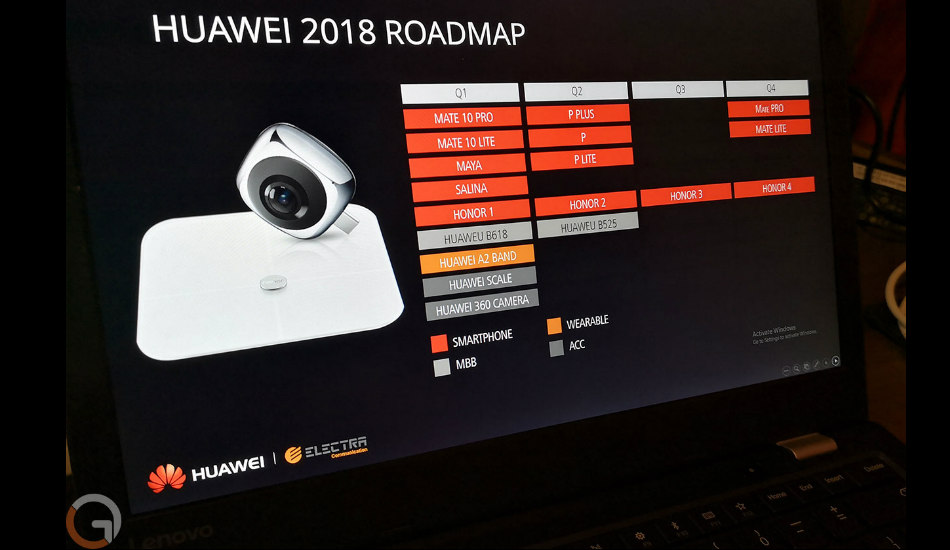 Further, in the same quarter, the company will launch a new smartphone under Honor brand. The phone is reported to be Honor 1, though there is no information available about the upcoming smartphone. The Q1 will also witness the launch of Huawei Scale, Huawei A2 Band, Huawei 360-degree camera and Huawei B618, which is said to be a wireless router.

Coming to Q2 of 2018, Huawei will launch the upcoming P11 series, which is expected to be showcased at Mobile World Congress (MWC) 2018. However, the report reveals that the company will instead name the device as Huawei P20 and it will be launching P20 Plus, P20 Lite and standard P20. The company will also launch another Honor smartphone in the same quarter as well. Lastly, Huawei will introduce another wireless router named as Huawei B525.

The Q3 of 2018 will see the launch of an Honor smartphone, while in Q4 of 2018, Huawei will launch the next-generation of Mate series, which will include a Mate Pro and Mate Lite smartphones. Further, the company will also launch an Honor-branded smartphone in the Q4 as well. However, there is no way to authenticate this information, so we suggest you take this report with a pinch of salt. However, if the report is true that Huawei surely has some good lineup of products for the year 2018.