Honor V6 is the first tablet in the world to feature support for 5G connectivity and WiFi 6.

Honor has unveiled a new Android tablet named Honor V6 in China in both Wi-Fi and 5G versions. The Honor V6 is currently up for pre-orders in China but the company has not revealed the pricing and availability details yet.

Honor V6 tablet comes in Gray, Green and Black colours. Honor will also sell the Magic-Pencil stylus and the keyboard cover for the tablet separately. It is also the first tablet in the world to feature support for 5G connectivity and WiFi 6.

Talking of specifications, Honor V6 features a 10.4-inches WUXGA+ IPS display with 2000×1200 pixels screen resolution, 225 PPI. Even though there are significant smaller bezels along the sides, it manages to offer 84% screen-to-body ratio. 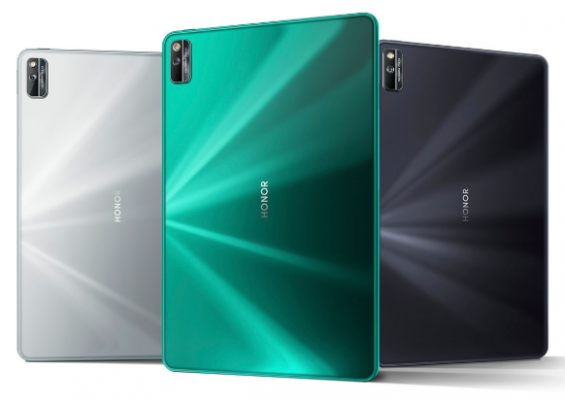 Under the hood, the Honor V6 Tablet is powered by the newly announced Kirin 985 platform which allows it to support 5G connectivity in both standalone (SA) and non-standalone (NSA) modes. For the storage, the tablet features a single configuration option with 6GB of RAM and up to 128GB onboard storage space. The storage is expandable with up to 512GB with microSD.

The tablet sports a massive 7250mAh battery with support for 22.5W fast charging via USB-C port. It runs Magic UI 3.1 based on Android 10, has support for Magic-Pencil stylus that supports 4,096 levels of pressure sensitivity.

For the camera, the device has 13-megapixel rear camera with f/1.8 aperture, LED flash and 8-megapixel front-facing camera with f/2.2 aperture for selfies and video calls. The tablet comes loaded with quad stereo speakers and four microphones.