Honor 9N vs Zenfone Max Pro M1 vs Oppo Realme 1: Which budget phone is right for you?

The latest Honor 9N is priced to compete in the same segment as Asus and Oppo , with their offerings the Zenfone Max Pro M1 and Realme 1 respectively. With Asus and Oppo entrenched players in the sub Rs 15,000 market in India, does the Honor 9N pack in enough firepower to challenge, let along topple them?

Honor India has launched the Honor 9N, the Indian version of the Honor 9i which was announced in China earlier last month. If it wasn’t obvious enough, the Honor 9N is designed the same way as it is internally similar to its Chinese counterpart. However the device is available in India in Blue and Purple, two of the four colours the Honor 9i was announced in. Powered by its own mid-range Kirin processor where the internals are sandwiched between two layers of glass, the Honor 9N will be available for under Rs 15,000. To its credit, thanks to a resurgent prformance in the market in the past year, launches from Honor have become well awaited. Let’s see if this one met expectations.

At first glance, the Honor 9N takes a lot of inspiration from the Honor 10. Measuring in at 149.2×71.8×7.7mm, the Honor 9N is flanked by metal edges with 2.5D glass on the front and rear panels, all of which weighs in at just over 150 grams. This glass-clad rear panel will be coloured in Purple & Blue and while some might call them flashy, that’s the way a device differentiates from a generic phone. And of course, there’s a notch on the front, which has gotten to be a trend in 2018. Though the Vovo Nex might have signalled the beginning of the end for the notch, we believe.

Th Zenfone Max Pro M1 on the other hand, though designed like any other mid-range smartphone, features a metal unibody with 2.5D curved on the front. Looking at the phone front the back, we can easily distinguish the Asus phone from other metallic framed smartphone since the camera module is aligned vertically and sits flushed with no bump whatsoever. Though a little slippery, the smoother premium finish at the back more than makes up for it. 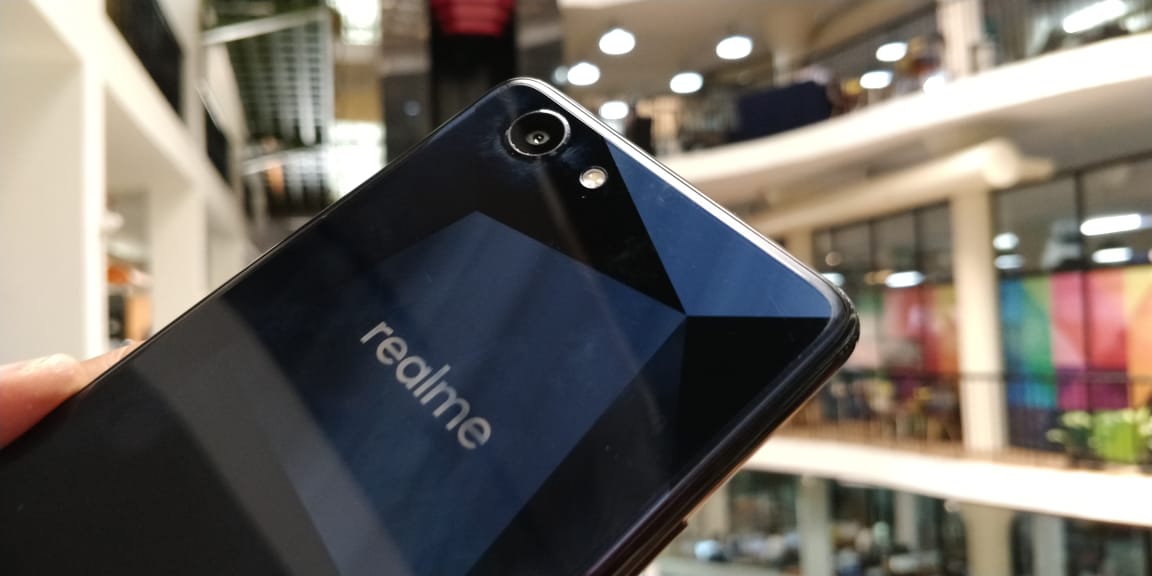 Oppo Realme gives its users a bold unique look with a fibreglass body at the back that has a Diamond-ish finish, resembling the old Nokia Prism. The all-black design with various shades of grey on the back panel and curved edges make the Realme 1 quite sweet to look at and hold it as well. Though the glass-clad panel could welcome dust and fingerprints, that doesn’t stop the Oppo device from being the eye-candy it is. 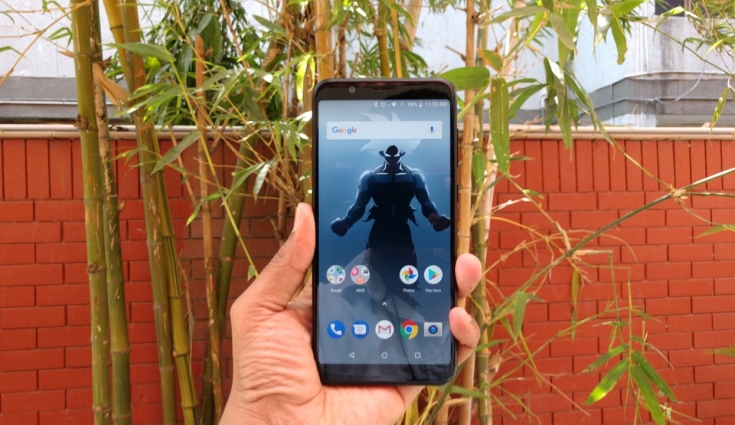 The Zenfone Max Pro features an elongated 5.99-inch FHD+ display with a resolution of 2160 x 1080 pixels. The display is well lit with a brightness of 450 nits and a contrast ratio of 1500:1, scoring 85 percent on the NTSC colour gamut. With a thinner lip at the bottom and only some space left on top for the camera and the earpiece, the display on the Zenfone Max Pro is as immersive as any high-end phones present in the market and manages to output 76.2 percent screen-to-body ratio with a pixel density of 402 ppi. 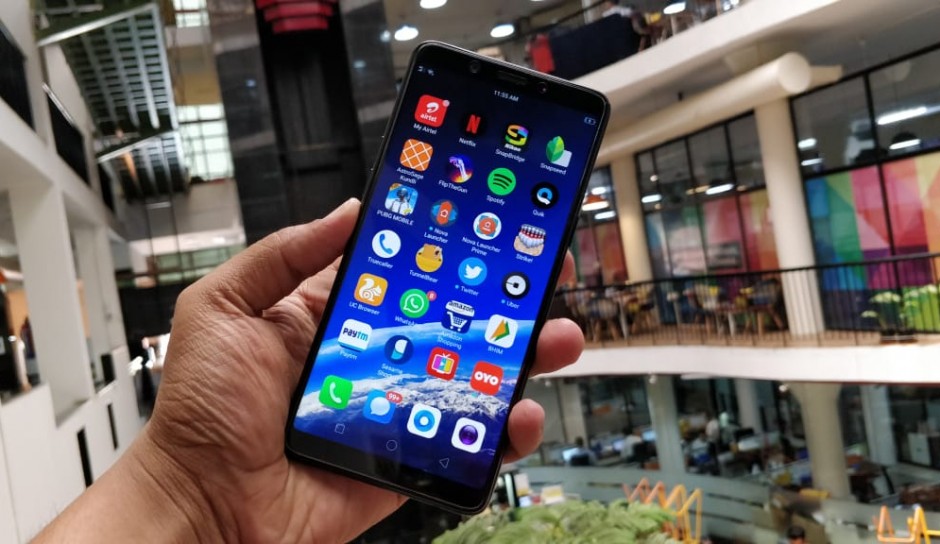 Though the Realme 1 provides a similarly sized 6-inch FHD+ screen with a resolution of 2160 x 1080 pixels, the maximum brightness on the phone clearly falls short outdoors. However, the phone comes with even thinner bezels than the Note 5 Pro, which looks pleasant to the eye but only when used inside a room. With minimal bezels and lack of a notch on the front, the Realme 1 will be able to offer a screen-to-body ratio of 78.9 percent.

The Honor 9N sports a 5.84-inch FHD+ display with an aspect ratio of 19:9 and a resolution of 2280 x 1080 pixels which results in a pixel density of 432 ppi. There’s a notch that looks similar to the one of the Honor 10 which gets most of the fundamentals and essentials right with no noticeable bezels on the edges. However, there’s a thick bottom chin with the Huawei branding that resricts the screen-to-body ratio of the phone to 79.5 percent. But with a denser screen and scoring the most screen space among the three, the Honor 9N steals the scene here.

The Realme 1 is powered by an octa-core MediaTek Helio P60 processor with 6GB of RAM and 128GB of internal storage and can run all of your daily tasks swiftly, for real. This is due to the fact that the Helio P60 lines up decently when listed against Snapdragon’s 600-series chipsets. Not just daily usage, playing graphics intensive games like PUBG also kept the device running smoothly with no lags or heating whatsoever. The massive 128GB storage means you’ve got enough internal space to store all your photos and movies for entertainment on the go. The only downside to its hardware is the lack of a fingerprint scanner which kind of is a huge deal in terms of security.

The Honor 9N is powered by Huawei’s own HiSilicon Kirin 659 processor with Mali-T830 MP2 GPU. Itcomes in three variants in India – 3GB RAM+32 internal storage, 4GB RAM+64 internal storage, 4GB RAM +128 internal storage priced at Rs 11,999, Rs 13,999 and Rs 17,999 respectively. The device, however, offers 64GB and 128GB of onboard storage. While daily usage won’t be hindered with the smaller RAM, it needs to be seen how the device will handle extreme graphics intensive games. This is where Huawei’s GPU Turbo technology is expected to help users with smoother gameplay, quicker loading up and lesser power consumption.

Asus’ Zenfone M1 is powered by the Snapdragon 636 chipset which also powered the popular Redmi Note 5 Pro. The variant in question comes with 6GB of RAM and 64GB of internal storage and as tested in our in-depth review, the Max Pro works like a charm. Day-to-day functions are managed smoothly and the device also does an immersive job in the gaming department. Moreover, the SND 636 SoC consumes lesser power than any chipset in the mid-range catalogue and even so offered no compromises in performance whatsoever. 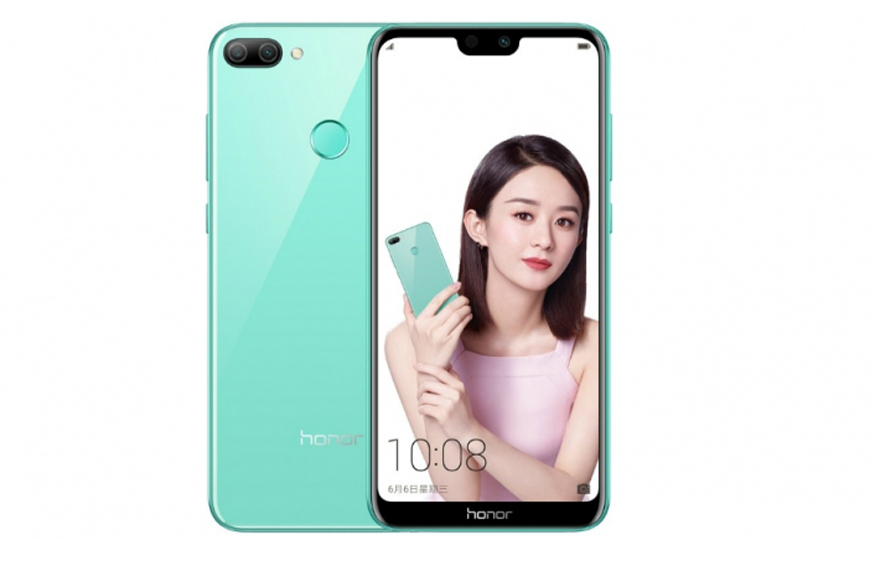 The camera on the front of the Honor 9N comes equipped with a 16MP photosensitive enhanced camera with a large 2.0μm pixel size that will be effective in clicking selfies on low light conditions. In addition to the face unlock feature, the front camera will also include an AR and Beauty mode. At the rear end, the primary camera on the Honor 9N will be a likely combination of 13MP and 2MP sensors with dual-tone LED flash, AI scene detection, and PDAF. 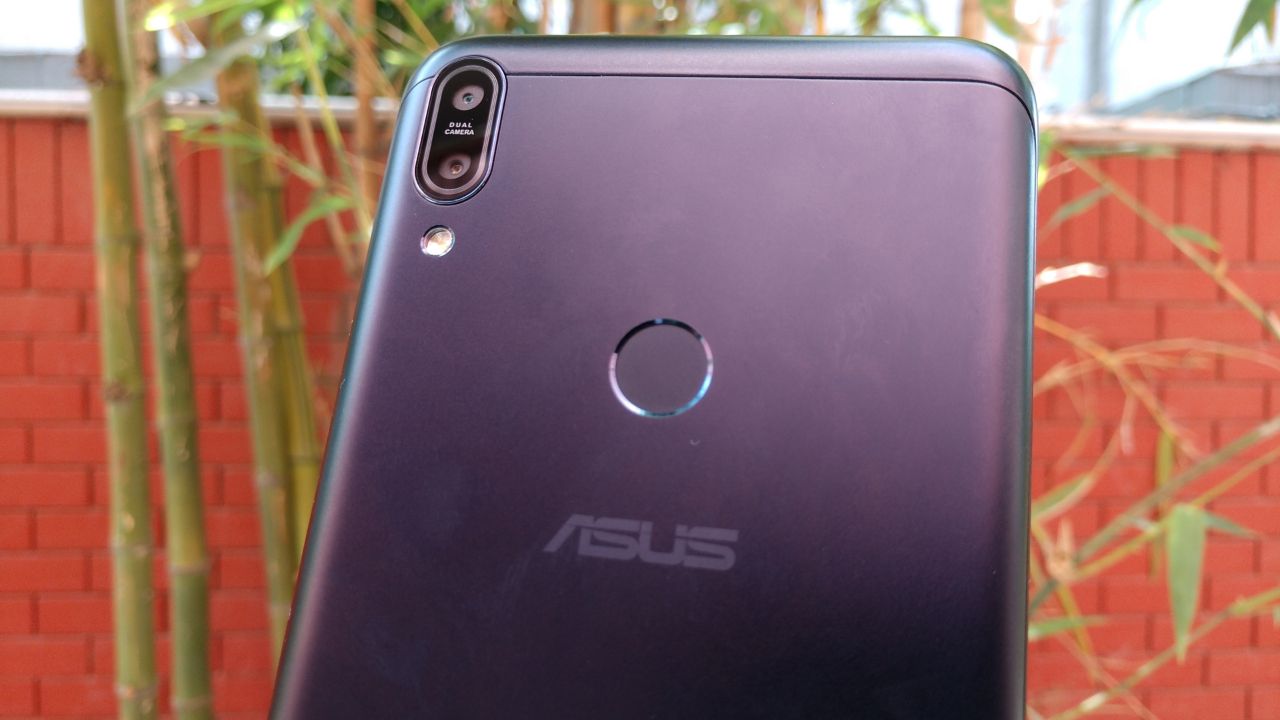 The Zenfone M1 packs in a combination of dual 13 MP (f/2.2, 1.12µm) + 5 MP (f/2.4, 1.12µm) lenses with OmniVision phase detection autofocus, a 5 element lens, and a wide-angle 80-degree lens. In good amount of lighting, the pictures captured on the device came out with definitive natural colours and details. The bokeh effect works on most days but you can expect a drop in quality once a while or under low light conditions. There’s also an 85.5-degree wide angle 8-megapixel front snapper with an aperture of /2.2 aperture.

The camera on the Oppo Realme 1 doesn’t perform up to the mark as its performance does. The 13-megapixel rear camera is okay at best as most of the pictures clicked appear to be washed out with no level of detail. Though colour saturation can be improved with the help of a Super Vivid mode, low light pictures are pretty noisy. However, the front-facing 8MP sensor on the front does some justice to the device as it clicks decent portraits with the right depth of field. 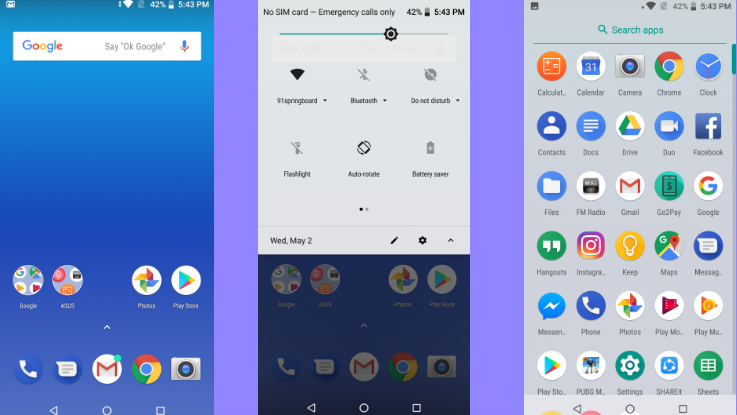 Asus has come a long way from earning flak over its ZenUI to being praised for ordering a near-to-stock Android experience on the Zenfone Max Pro M1. Not only does the M1 come with the latest build of Android 8.1 Oreo, the interface offers minimal bloatware and no heavy customisations. That in addition to a snappy Snapdragon 636 provides a smoother user interface that is easy to navigate. 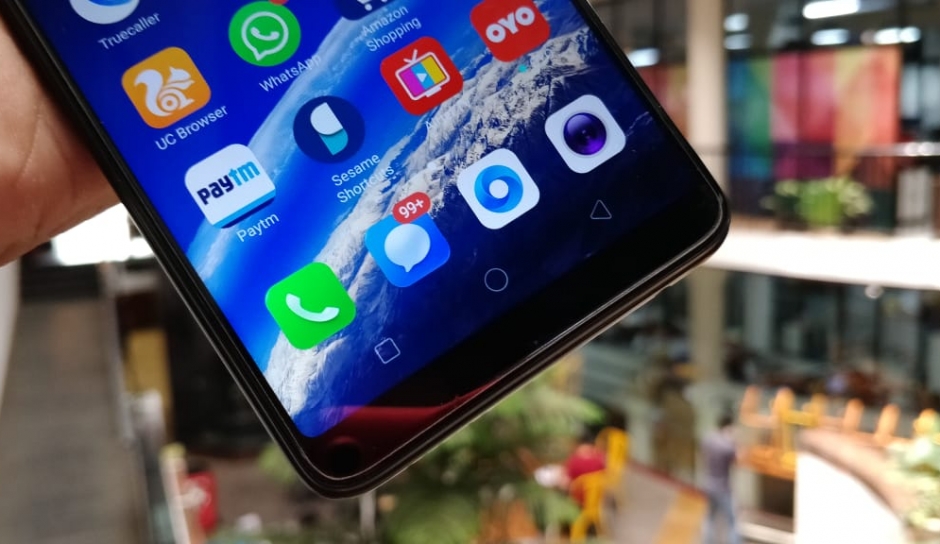 On its release, the Realme 1 came with the latest Android 8.1 Oreo out of the box but Oppo did manage to cram in its own ColorOS 5.0 which is heavy on background usage with tons of bloatware added onto the screen. The interface still needs some getting used to as apps are placed randomly on the home screen instead of alphabetical order. However, the Realme 1 will be able to handle the load smoothly considering it runs on 6GB of RAM.

The Honor 9N is running the Android 8.0 Oreo with Honor’s own EMUI 8.0 on top and the device will be one of the firsts to be bumped up with the breakthrough GPU Turbo technology. GPU Turbo will help users experience smoother gameplay, quicker loading up and lesser power consumption while playing games on their smartphone. However, with EMUi 8.0, the interface is heavily inspired by Apple’s iOS though there’s a learning curve to keep in mind when buying the Honor 9N.

Although the Oppo Realme 1 comes with a rather standard 3,410mAh battery, with normal use, the phone lasted more than one day which is quite impressive. What’s interesting is that even when the phone was tested with heavy usage like playing games, making calls and browsing the internet, it still made it through the end of the day, owing to impressive software optimisation and the MediaTek chipset.

The 9N from Honor will be fuelled by a 3,000mAh battery though it’s unclear as to whether the 9i supports fast charging like its powerful Honor 10 sibling. If it does, the device will come with one of the fastest charging 5V/4.5A adapters in the market offering a total of 22.5 watts to charge up the 3,000mAh battery.

Asus has also pushed limits to equip a massive 5,000mAh battery, which first debuted on the Zenfone Max three years ago. The large battery will last you to up to two days on heavy usage and might even give you three days of power on moderate use and can be charged in as much as two hours, which is pretty impressive.

All the three smartphones have their own plus points but if we look at the overall package Asus Zenfone Max Pro M1 scores some extra points as compared to Honor 9N and RealMe 1.