Huawei is all set to launch the successor of its popular Honor 6X smartphone which is dubbed as Honor 7X on October 11 in China. Now ahead of the launch, Honor 7X with model number Huawei BND-AL10 has been spotted on a GeekBench benchmarking website. The specifications in the listing are in line with the specifications which were leaked before of the upcoming smartphone. 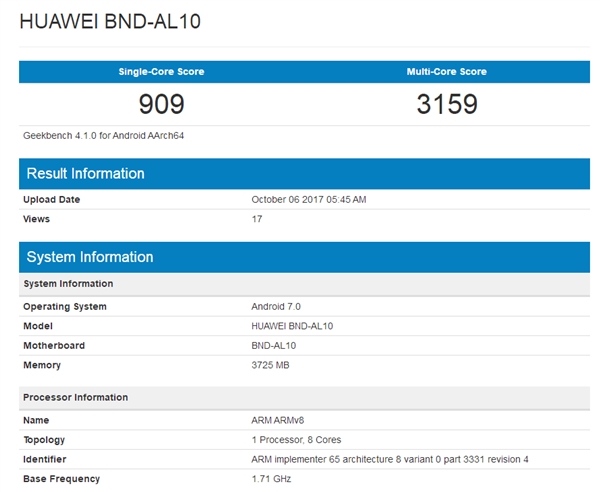 In the GeekBench listing, the Honor 7X got 909 points in single-core test and in multi-core test it received 3159 points. As per the listing on Geekbench, the Honor 7X has 4GB RAM and 1.71 GHz octa-core processor. The handset is based on the Android 7.0 Nougat operating system.

For the camera, the Honor 7X is said to offer a 12-megapixel dual rear camera setup and will be backed up by 4000mAh battery. Unlike Honor 6X, the Honor 7X will feature a horizontally aligned dual cameras instead of a vertically aligned one. Furthermore, the smartphone is rumoured to feature a rear-facing fingerprint sensor. It will also sport a full metallic body with a USB Type-C port.