Honor 7X to be launched on October 11 in China

Huawei is all set to launch the successor of its popular Honor 6X smartphone which is dubbed as Honor 7X on October 11 in China. The confirmation comes straight from the company’s official Weibo page via a teaser poster of its upcoming smartphone. 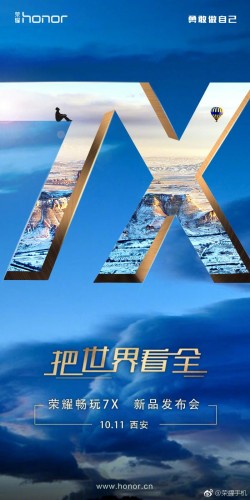 The teaser image comes with a tagline as “Want to see farther than ordinary people? Higher? Wider? Everywhere is your world.” The slogan hints at the phone having an 18:9 ratio EntireView display.

For the camera, the Honor 7X is said to offer a 12-megapixel dual rear camera setup and will be backed up by 4000mAh battery. Furthermore, the smartphone is rumoured to feature a rear-facing fingerprint sensor. It will also sport a full metallic body with a USB Type-C port.