Here's why Xiaomi's upcoming flagship is called Xiaomi Mi 8, and not Xiaomi Mi 7

Xiaomi is expected to announce the flagship Mi 8, Mi Band 3 and other IoT products during the event. It has also confirmed yesterday that it will unveil the latest MIUI 10 at the event as well.

Xiaomi is all set to launch the Xiaomi Mi 8 smartphone on May 31 at the launch event to be held in Shenzhen, China. We already know that the company has already decided to ditch the munch rumoured Mi 7 in favour of Mi 8. Now Xiaomi has just explained that decision.

Playfuldroid reports, the company has shared a poster on Chinese microblogging website, Weibo containing a huge number “7”, but below it mentions the Mi 8. In the poster, the company has mentioned that the upcoming Mi 8 flagship is a huge improvement over the Mi 6 and that is why they have decided to skip the number 7 and jump straight to 8. Xiaomi has also confirmed that the Xiaomi Mi 8 will be launching as its 8th-anniversary smartphone. 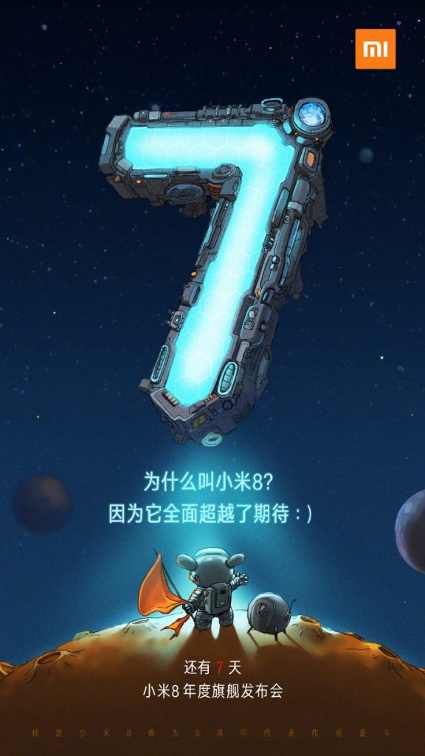 Xiaomi is reported to announce the flagship Mi 8, Mi Band 3 and other IoT products during the event. The brand has also confirmed yesterday that it will unveil the latest MIUI 10 at the event as well. The user interface is expected to be based on the Android 8.0 Oreo, as the recently announced MIUI 9.2 is build on 7.1.1 Nougat.

As per earlier reports, Xiaomi flagship will be powered by a Qualcomm Snapdragon 845 SoC inside a device which features a 6-inch OLED display. It is said to be having 6GB/8GB of RAM and up to 64/128GB of onboard storage. The Mi 8 is also expected to run Android Oreo on top of a new MIUI version and backed up by a 4000mAh battery. Besides the in-display fingerprint sensor, the phone is also rumoured to support 3D facial recognition.

Xiaomi Mi Mix Alpha may be launched in India, no word on Poco smartphone